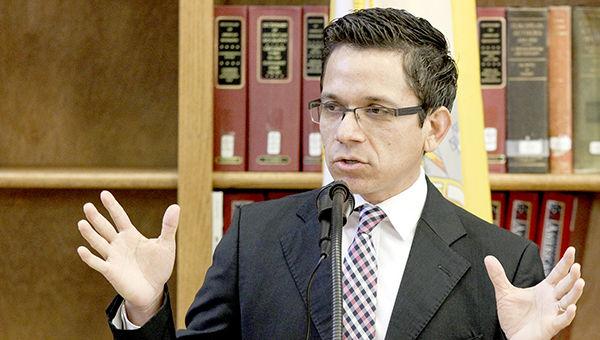 JACKSON — Vicksburg Warren Economic Development Partnership President and CEO Pablo Diaz will have a seat at the table when it comes to the investment in workforce development in Mississippi.

Tuesday, Diaz was named to the reconstituted State Workforce Investment Board. He was appointed to the board and to the board’s executive committee by Lt. Gov. Delbert Hosemann.

Parker served as chairman of the Senate’s Workforce Development Committee, which pushed the legislation that dramatically changed the structure of the State Workforce Investment Board.

Senate Bill 2564, authored by Parker, improved the SWIB by reducing it from 45 to 31 members and requiring the vast majority — including the chairman of the board — be representatives from the business community. Small business representation is required. The legislation also tasked the SWIB with setting up an Office of Workforce Development and hiring an executive director to coordinate workforce development efforts across the state.

“David Parker had a vision to track the state and federal funds already being spent on workforce development and begin to consolidate efforts to maximize the potential of every tax dollar,” Hosemann said. “Thanks to his efforts, citizens across the state will have the opportunity to skill up and earn higher wages, and companies will have the workforce they need to put roots down in Mississippi and expand.”

In the release announcing Diaz’s appointment, Hosemann’s office heralded the accomplishments the Partnership has had since he took over economic development in Warren County.

Since Diaz was selected to lead the Vicksburg Warren Economic Development Partnership in 2017, the organization has attracted six new companies to the area and helped others to expand, Hosemann’s office said. These additions have resulted in 730 new direct jobs for the community, and an associated investment of more than $108 million.

Before joining the Partnership, Diaz served as executive director of the Grenada Economic Development District.

“Pablo’s potential is limitless, and we are fortunate he has shared his talents with Mississippi,” Hosemann said. “He recognizes opportunities and goes after them with the persistence necessary to succeed in a difficult economy, and he will bring the same tenacity to SWIB and workforce development in the state.”

Diaz said he looks forward to working with the board and was honored to have been appointed by Hosemann.

“I was humbled and excited to receive the call from Lt. Gov. Hosemann to serve on the State Workforce Investment Board. There is nothing more valuable in our state than our workforce, and we must make productive investments that empower our people to expand their skill set and take advantage of future learning opportunities,” Diaz said. “Our economy grows as our workforce increases its productivity and adaptability to new technologies. I look forward to serving judiciously on this board as we strive to position Mississippi’s workforce development system as the best in the nation.”

Parish currently serves as the vice president of operations and contracting at Burns Dirt Construction Inc. in Columbus. A small, family business in its second generation, Parish has been a partner since 2017 and has held the company’s contractor license since 2015. He is a founding member of FORGE, a community group in Columbus and Lowndes County focused on helping grow K-12 students’ interest in skilled trades.

Parish earned a bachelor’s in business, with a concentration in economics, from Mississippi State University.

First elected in 2013, Parker is a small business owner and optometrist representing DeSoto County residents mostly in Horn Lake, Southaven and Olive Branch. He previously served as chairman of the Senate Veterans and Military Affairs Committee. A lifelong resident of DeSoto County, Parker completed undergraduate studies at Christian Brothers University and graduated from the Southern College of Optometry.

Identity theft is devastating. Not only can it be financially harmful, but it is also a hassle to close and... read more