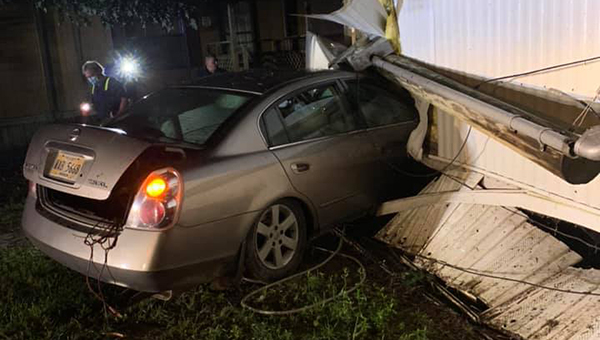 A Nissan Altima is seen driven into a mobile home on Grange Hall Road early Sunday. Ray Wiley and his girlfriend were in the home at the time of the accident. No one was injured.

Ray Wiley and his girlfriend were awoken early Sunday when a vehicle left a nearby roadway and struck the mobile home they were in.

“It felt like a bomb going off,” Riley said. “I stood up and it forced me to hit the wall.”

Officials with the Vicksburg Police Department said the home, located on Grange Hall Road, was struck by a 2003 Nissan Altima driven by an unidentified driver who was drunk. The vehicle was traveling westbound on Grange Hall Road when it left the road and struck the home at around 4:32 a.m. Sunday.

Deputy Chief Bobby Stewart said the driver was arrested for driving under the influence as well as other misdemeanor contempt of court warrants.

Stewart confirmed that no one was injured in the accident.

As for the home, Wiley said it was totaled. The frame was severely damaged as the entire mobile home was kicked forward by a few feet. Wiley said his landlord has relocated the couple to another mobile home in the park.

Two men were shot late Friday night when a gathering at Best Western Hotel in Vicksburg turned violent. According to... read more