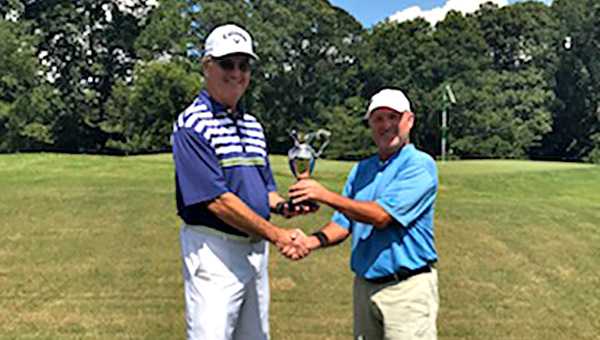 Jeff Harpole receives the trophy from club pro Kent Smith after winning the Vicksburg Country Club Championship on Sunday. It is Harpole’s third consecutive victory in the tournament. (Submitted to The Vicksburg Post)

Jeff Harpole lost his grip on one of Warren County’s golf majors. He showed this weekend, however, that he’s not about to relinquish his status as the county’s best golfer as easily.

Harpole rode a strong opening round to a tournament total of 221, and cruised to a four-stroke victory Sunday at the Vicksburg Country Club Championship. Harpole won it for the third year in a row to rebound from a runner-up finish at the Warren County Championship the week prior.

Harpole has won the county’s two biggest tournaments in five of his last six attempts since 2018.

Harpole got this one by taking a big lead early and never letting it go. He shot a 70 in the opening round on Friday to build a five-shot lead. He followed that up with rounds of 72 on Saturday and 79 on Sunday.

Wilson Palmertree made a Sunday charge, but was too far behind to overtake Harpole. Palmertree entered the final round nine shots back and shot a 74 to tie for the day’s lowest round, but could only make up half of his big deficit. He wound up at 225 for the tournament, good for second place and the junior club championship.

Charles Waring finished third, at 226. He was six shots behind Harpole at the start of Sunday’s round after shooting a 73 on Saturday, but finished with a 78 and only gained one shot on the leader.

Other flight winners were Richie Cowart (248) in the third flight; Brady Ellis (256) in the fourth flight; and Dan Muirhead (281) in the dog fight flight.

Two men were shot late Friday night when a gathering at Best Western Hotel in Vicksburg turned violent. According to... read more