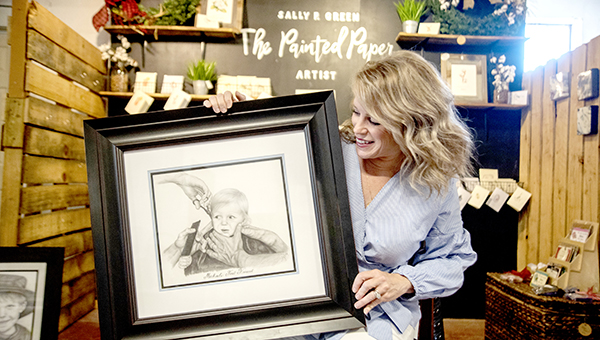 Sally Green shows off one of her favorite pieces, and drawing of her son, Michael. (Courtland Wells/The Vicksburg Post)

For Sally Green, art was obviously in her blood

When the COVID-19 pandemic forced much of the country to pause and shelter-in-place, most people worried about how to fill their time away from work, school and social gatherings. Sally Green, on the other hand, thought to herself, “Oh, wait a minute. We don’t have to go anywhere? Yay!”

“During this pandemic, I have been so productive,” she said. “I have done more in the past three months than ever.”

Green, a Vicksburg artist, admits that her creativity is a bit scattered at times. There are artistic tangents she takes to new projects, new mediums and techniques.

“I am one of these creative people who is all over the map. I do portraits, I do watercolors, I’ve got the cards,” she said, looking around her “The Painted Paper” booth at the Open Market on Washington Street. “It can almost be a curse because I have so many ideas in my mind and I can never get them all done.”

It might not be that Green has so many ideas, it might just be she is making up for lost time.

Growing up, Green thought she wanted to be an artist. She liked art, felt a calling to it.

While attending Louisiana Tech, she went to her parents and discussed changing her major to art, and moving away from the business management degree she had been working on. They talked her out of it.

But, there was something about the need to create that was innate. It was not until later in life that she learned her birth mother, who died at 26, had always wanted to be an artist. Years later, when her family made a random stop at a museum in Arkansas, she noticed a portrait by an artist with the last name of Lenon.

An odd name for sure, but for Sally, it was her birth mother’s last name. “Could I be related to this artist?” she thought.

After reaching out to the lone member of her birth family remaining, an uncle in Oregon, she learned that Sally was in fact related to that artist. It was her grandmother, Blanche Lenon, who was a commissioned portrait artist in Arkansas.

That was it. Her appreciation for art, her passion for art and her need to create was not something out of the blue. It was genetic. It was in her blood.

But what has turned into a cottage art business and regional following did not start until Sally was 42, after years spent in the insurance industry and after her son, Michael was born.

It started when Sally found a book at Hobby Lobby on how to do portrait drawings from photographs. From there, her art has spanned drawing portraits, including one of her son’s first haircut, and others she has been commissioned to do. Most notably, it has been her cards that have drawn the most interest.

From the cards that depict the outline of Mississippi that are created one-by-one, to those highlighting iconic animals and things from Mississippi, she has lived up to the title of her line of artwork “The Painted Paper.”

Each card has a drawing of the item and a brief description.

“The western honeybee (Apis mellifera) is the Mississippi state insect,” the inside of the honeybee card reads. “A honeybee’s wings beat up to 200 times per second, giving them the ability to fly as fast as 15 miles per hour. In an entire lifetime, a bee will produce only 1/12 teaspoon of honey. That’s ‘food for thought’ when contemplating an entire jar of honey.”

What makes each of the cards, whether it is the one featuring honeybees, alligators, magnolias, or the oyster (Mississippi’s official shell), or a glass of sweet tea (not the state’s official drink, but it really should be), each depicts the first time Sally drew each item; there was never a redo even though she tried once to do the honeybee again but ended up liking the first draft.

Those cards are printed out to order and are sold at her booth at Open Market. Examples of her work, and information about The Painted Paper, can be found online at thepaintedpaper.net.

But don’t think for a minute that Sally has settled on her style or mediums of artwork. That is still very much a work in progress.

“Bought some pastels, so that’s the next thing I want to do,” she said. “My birth mother wanted to be a sculptress and that is something I have never tried to do. So it’s just a matter of time before I get to that.”

Sarah, Henry, Coco, Chloe and a few of their new friends greeted each other in the parking lot while waiting... read more