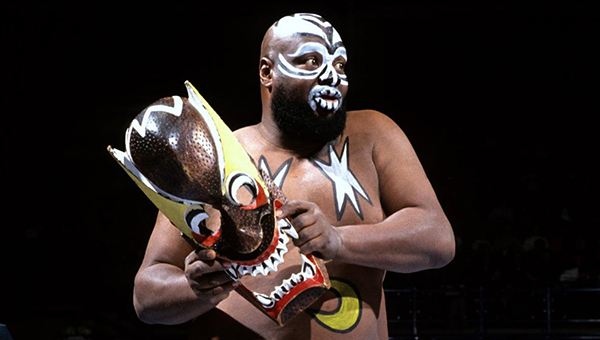 James Harris, a professional wrestler who had a 30-year career as Kamala the Ugandan Giant, died Sunday at the age of 70. Harris was a Mississippi native. (Courtesy of World Wrestling Entertainment)

Former professional wrestler James Harris, a Mississippi native who was better known by his ring name “Kamala,” died on Sunday. He was 70.

Harris was born in Senatobia, Mississippi, in 1950 and grew up in Coldwater. He began his wrestling career in Michigan at the age of 25, and debuted with the National Wrestling Alliance in 1978 as “Sugar Bear Harris.

In 1982, Harris met Mid-South Wrestling promoters Jerry Lawler and Jerry Jarrett while visiting a friend at a show in Memphis. The 6-foot-7. 380-pound Harris soon went to work for the promotion as the character “Kamala,” a Ugandan headhunter who dressed in a loin cloth, spoke only in grunts, and had war paint on his face and torso.

The character became Harris’ trademark during a career that lasted nearly 30 years. He headlined shows in the then-World Wrestling Federation in the 1980s and 90s, battling the likes of Hulk Hogan, Andre the Giant and the Undertaker.

Harris also wrestled as Kamala in major promotions such as the USWA, WCW, World Class Championship Wrestling and the AWA. He won a dozen top championships in various promotions and wrestled several shows in Vicksburg in the 1980s.

His final match was in August 2010, and he spent the last 10 years of his life battling health issues.

Harris had his left leg amputated below the knee in 2011 due to complications of high blood pressure and diabetes. He had his right leg amputated a year later.

In 2017, Harris had emergency surgery in Oxford, Mississippi, to clear fluid from around his heart and lungs.

In a statement announcing Harris’ death on Sunday, the WWE did not say what caused it or where he died. He had been living in Tate County, just south of Memphis, in recent years.

In 2019, a number of Florida-based wrestlers and fans launched a GoFundMe campaign to help pay Harris’ medical bills and $13,000 in back taxes that he owed. The campaign raised more than $15,000.

“That means a lot,” Harris told the Tampa Bay Times in 2019. “It means I did my job in the ring. It is a feeling I cannot describe. It is wonderful.”

Cannons baseball tryouts The Vicksburg Cannons 10U baseball team will have tryouts on Saturday, Aug. 15 at the Culkin baseball... read more