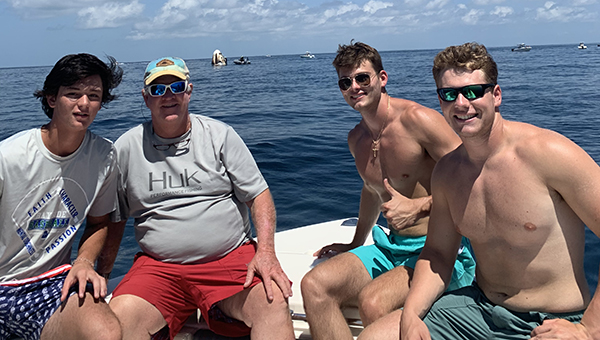 Ricky Lowery and friends left Orange Beach Marina Aug. 3 for a deep-sea fishing trip in the Gulf of Mexico, looking to capture some amberjack or black snapper. Instead, they captured a glimpse of history.

Nearly 40 miles south of Pensacola, Fla., Lowery and his group had a front-row seat as two NASA astronauts returned to Earth, splashing down in the Gulf of Mexico. It marked the successful end to SpaceX’s demonstration flight, returning test pilots Doug Hurley and Bob Behnken after more than 60 days in orbit aboard the International Space Station.

Lowery said as they were heading out they noticed a bunch of boats gathered in an area. He thought the boats were fishing for Mahi Mahi in a riptide and decided to join them. But that group was not looking for a big catch, they were hunting history.

“I knew the astronauts were coming in; my daughter told me it was going to be somewhere south of Pensacola, but I didn’t think anything more about it. I had forgotten about it,” Lowery said.

As they got close to the group, the boats scattered and headed further south. Lowery turned with them.

“I turned the boat the way they did and as soon as I turned my boat, we saw the capsule falling out of the sky,” he said, saying they noticed the capsule with its large parachutes deployed.

He said he was able to outrun all but five boats to the now floating capsule.

“We had a ringside view. We pulled up there. Knowing the astronauts were still in there. Watching it all was cool,” Lowery said. “I told the others on the boat, ‘This is a chance of a lifetime, this will never happen again.'”

Lowery said he and the other boats kept their distance from the capsule as SpaceX’s ship moved closer to pull the capsule from the water and allow the astronauts to get out.

“It was mind-boggling being that close, it really was,” Lowery said. “Here we are, just heading out to go fishing and here comes this thing falling out of the sky. I thought, ‘man this is cool.'”

Lowery and those on board took photos with their phones to capture history. It was the first time in 45 years since astronauts returned to Earth by way of a splashdown. The last splashdown was in July 1975, at the end of the Apollo-Soyuz Test Project.

“People told me, ‘Only you, Ricky, would be lucky enough to pull this off,'” he said. “I’d rather be lucky than good, though.”

Lowery said they stayed in the area about an hour and a half before heading back to Orange Beach. Later, while eating dinner at Doc’s Seafood in Orange Beach, Lowery looked up to one of the TVs.

“I looked over and the TV had the news on showing the video of the capsule splashing down,” Lowery said. “And a few minutes into it, I looked over at Dan and said, ‘Dan, there’s our boat.'”

After posting photos they took while close to the capsule, Lowery said friends began to accuse him of cooking up one of the tallest fishing tales of all time.

“I had friends accusing me of Photoshopping the picture,” he said. “First off, I told them, I don’t know how to Photoshop.”

The splashdown was the first time a commercially built and operated spacecraft carried people into orbit and returned them to Earth safely. The return clears the way for another SpaceX crew launch as early as next month and possible tourist flights next year.

Lowery might be watching, but probably from a little farther away.

“I have had some cool stuff happen in my life, but that was as cool as it gets, especially knowing nobody was going to believe I was out there,” he said. “I told those on the boat with me, ‘We will never get another experience like this as long as we live. This is a historic moment.'”