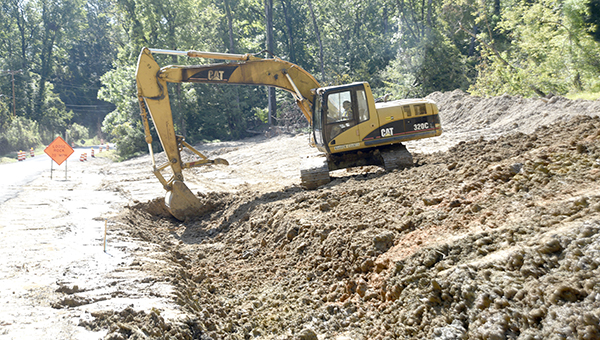 Warren County crews work to make a ditch along the slide area on Redwood Road Monday. The work is being done ahead of expected heavy rains forecast for Wednesday and Thursday that are part of Hurricane Laura. (Courtland Wells/The Vicksburg Post)

Ballground Road to close ahead of expected heavy rainfall

The track of the storm, and the significant amount of rainfall — particularly with what could be a Category 2 or 3 Hurricane Laura — has the attention of Warren County Engineer Keith O’Keefe and the county’s road department.

Monday, O’Keefe told county supervisors during their work session the need to close Ballground Road and do extensive work on Redwood Road in the coming days due to the expected heavy rainfall. The concern, O’Keefe said, comes from the damage the two roads suffered in January and February during historic rainfall, which could be made worse by the inches of rain that are expected later in the week.

“We have had a landslide on Redwood Road and the county has removed a lot of material already, but there is still a hillside there and it is wet, it stays wet,” he said. “As it gets additional rain, it continues to move. So we want to make sure we have a ditch along the south side of the road, near the hill, that is sufficient to handle the stormwater runoff during a big rain.”

O’Keefe said county crews were working Monday to dig a ditch closer to the hillside to accommodate the expected heavy rains, but that was not prevention enough not to be concerned enough to preemptively close the road to traffic.

As for Ballground Road, the storms in January and February caused significant erosion near a curve in the road, so much so that it has crept very close to the roadway. O’Keefe said any additional erosion in that area would possibly make for an unsafe situation to motorists. For that reason, the road will be closed to traffic.

He added that he and others would be out in those areas during and after the storm to see if any additional damage was caused before reopening Ballground Road.

As of Monday afternoon, O’Keefe said he was unsure of when the Ballground would be closed, but that county officials were notifying residents the closure was coming.

Both roadways are scheduled for repairs in the coming months. While much of the engineering and design work on the repairs to current damage have been completed, bids have not been requested, nor have contracts been awarded.

As of 3 p.m. Monday, Laura — a tropical storm that is expected to quickly strengthen into a hurricane — was forecast to make landfall along the Louisiana gulf coast late Wednesday night into Thursday morning, with the storm to travel north and then to the northeast. But, Warren County and much of central Mississippi should experience impact from the storm — in the form of wind and heavy rains — well before the storm makes landfall and throughout the day Thursday.

The National Weather Service in Jackson Monday included Vicksburg in an area of marginal risk for severe storms for Wednesday afternoon and evening.

Crews with the city of Vicksburg worked Monday to install new banners along some of the entryways into Vicksburg. The... read more