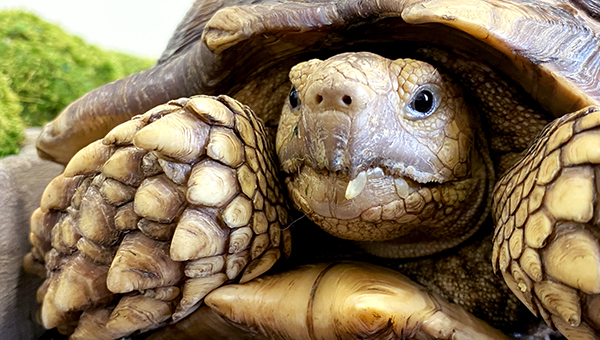 After a month on the ‘run,’ tortoise is found and reunited with family

The African spurred tortoise is native to the deserts of Africa, but one of them had the adventure of a lifetime recently in the wooded areas and roads along Warriors Trail in Warren County.

Sully, the 9-year-old African spurred, or Sulcata, tortoise, is one of two owned by Sunflower Exotics, a group that is home to lizards, turtles, tortoises and other animals that are at times shown at events and to organizations. On July 31, Sully, and Torterra, a 1-year-old Sulcata, went missing.

Sisters Kristen Klein and Kirstie White, with Sunflower Exotics, said on July 31 the gate to the tortoises’ holding pen was jarred open. That allowed Sully and Torterra to make a not-so-speedy getaway.

“We are assuming the gate didn’t latch all the way and Sully, I’m pretty sure, pushed it open and they both went on their merry way,” Klein said.

Torterra, much smaller than Sully, was found the next day roaming behind the house, near the pen. Sully, who is much larger at more than eight pounds, was gone.

Klein said once the two were missing, she notified Central Mississippi Turtle Rescue hoping someone might see Sully. They did, but not in time.

“We went to the neighbors to let them know Sully was missing and to be looking out for them,” Klein said. “Some of them said, ‘Oh, we saw him and just thought it was another turtle.’ But, by that time, he was already gone again.”

White said the two placed “missing turtle” signs around the area and on social media. But still, a month went by and the trail went cold.

Sully had already been through a tough few years before being rescued by Klein and White. When they got him from a previous owner who surrendered him to them, Sully was 8 years old and a little less than two pounds. He should have been far bigger.

“At his age, he should be somewhere around 20 pounds,” White said.

Through the care White and Klein provided, Sully overcame a tough start. He was in good health, adding weight, and showing signs of good growth. Now he was gone.

The search finally — and happily — came to an end Monday, when Klein received a phone call from Central Mississippi Turtle Rescue that someone had found Sully nearly two miles away on Newmans Road — which, if you’re a tortoise, is quite a trip from his home on Warriors Trail. Klein was at a doctor’s appointment in Clinton when she received the good news.

“They told me that someone found him, close to the house. I was hopping up and down at the doctor’s office. I’m sure there were people there wondering what was going on with me,” she said.

Monday afternoon, the two picked up Sully, who was dirty and appeared to have had a run-in with one or more animals looking to make him a good meal. His shell was scratched and featured a few holes that appeared to have been punctured by sharp teeth. Still, he was home and feisty.

“We are assuming a dog punctured his shell,” White said. “Whatever got him, got him pretty good.”

Tuesday, Sully was seen by a veterinarian, who prescribed antibiotics and something to clean the holes in the shell.

“Next thing we need to do is make sure we put in a better latch on that gate,” Klein said.

Frustrated by repeat offenders, the Board of Mayor and Aldermen is doubling down on property owners who have been granted... read more