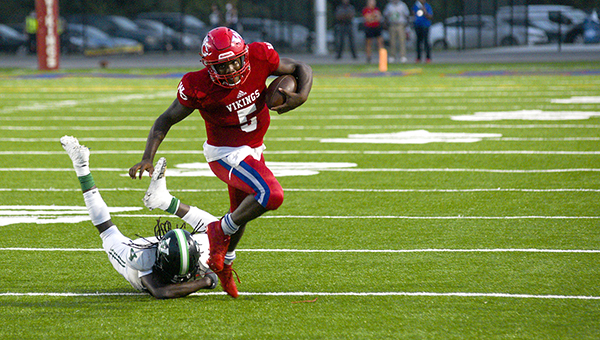 Vikings credit their conditioning for win over rival Vicksburg

For Warren Central, Friday’s game versus rival Vicksburg was not won in the first half, which they muddled through with a slim 3-0 lead.

The game was not won later in the second half, after two rushing touchdowns put the game well out of reach.

Friday’s season-opener, that just happened to be both the 2020 Red Carpet Bowl and the River City Classic all in one, was won in the weight room, on the practice field and during those long hours of conditioning in the summer heat. With a temperature of 88 degrees at kickoff and oppressive humidity settling over Viking Stadium during the game, it was the offseason work that paid off when the action started for real.

“We knew in this kind of weather, it’s tough. Four quarters is tough. We knew that we were going to have to find edges and felt like conditioning would be one of them,” Warren Central head coach Josh Morgan said. “We harped on it and all that goes to the kids for pushing and pushing and pushing. Mississippi summertime is not very fun. It’s hot, it’s tough, and we felt the best conditioning we could be in gave us a chance to win.”

Morgan said the offseason workouts — in a year when there was no spring conditioning or drills because of the COVID-19 pandemic — became even more important this year.

“You miss spring. You miss all of that and the time you have with them. Summertime was that much more important,” Morgan said. “We put a lot of focus on that and knew that it was going to be amplified this year. All the credit goes to our kids, getting up here real early in the morning and working out all summer long. This is why do it.”

In the second half, with the two teams neck-and-neck, it was the Vikings that appeared to start gaining the upper hand. The one and two-yard runs in the first half turned into 4- and 5-yard runs in the second, eventually leading to the game’s only two touchdowns.

“Our condition was big. When the corona stuff pushed us back, we didn’t have a full spring, so we had to cram everything together quick in the past few weeks,” Warren Central’s senior quarterback Kentrick Thompson said. “We just came out in the second half, settled in and played ball.”

It was Thompson’s big runs late in the second quarter that set up Vikings’ late first half field goal. It was also his runs — and touchdown — in the third quarter that stretched the lead. He carried the ball four consecutive times for a total of 59 yards on the game’s first touchdown drive, the last an 11-yard burst across the goal line.

He finished with 125 rushing yards on 22 carries. He was 3-of-6 passing for 34 yards, with no touchdowns and no interceptions.

“The offensive line got moving and you could see the guys get more and more confident and started moving the ball,” Thompson said. “When you don’t play football for four months, it’s like that, but we came through and won.”