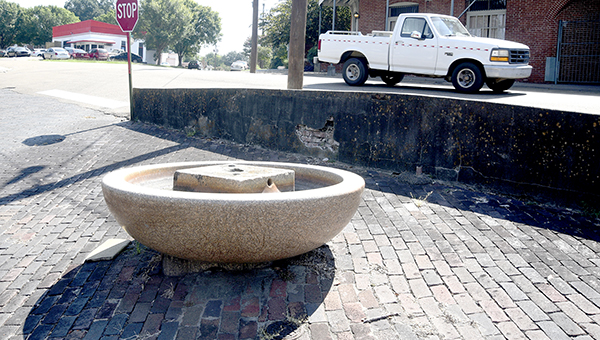 The fountain at the intersection of Openwood and Locust streets will soon be repaired and refurbished to its historical design. (Courtland Wells/The Vicksburg Post)

A fountain with an interesting story — a story many who pass by it each day in Vicksburg may not know — is about to be restored.

Tuesday, the Board of Mayor and Aldermen approved a restoration contract with James Dickey, of Vinalhaven, Maine, to return the fountain at the intersection of Openwood and Locust streets to the appearance it once had.

Dickey, who has access to the quarry where the original granite for the fountain was pulled from in the early 1900s, will perform the work.

“It’s wonderful the city has decided to restore something that is locally significant that no one knew about. But it is of national significance because there really are not that many around,” said Nancy Bell, executive director of the Vicksburg Foundation for Historic Preservation.

According to the contract approved for refurbishing the fountain, the repairs and refurbishment will include “provision of the top of the fountain, including brass lion’s head, and otherwise return the fountain to its original specifications.”

Bill Fulcher, who is part of a group restoring the former Gore’s Hardware into apartments, said they first approached Mayor George Flaggs Jr. about the idea of restoring the fountain and he had a deal for them.

“He told us that if we would restore Gore’s Hardware, he would find a way for the city to refurbish the fountain,” Fulcher said. “And to his credit, that is what he is doing. He wants that area developed just like we do.”

While the city will fund the repairs and refurbishment, it will also have to dig out a portion of the fountain that was covered by the brick street. Before the top of the fountain can be restored, it must be pulled up, set on a pedestal and have water service returned — all of which, Fulcher said, the city is committed to doing.

Once restored, the fountain will be among the few sites in the world where a National Humane Alliance fountain is actually restored and working.

Fulcher said there are only about 125 in the United States, and a few in Cuba and South America.

The cost of the project is $6,000 and is expected to be completed within 90 days. As for when the project would be completed, Fulcher said Dickey said it would take two-to-three months once the city approves the contract.

In 1907, Capt. Frederick B. Tilghman, the vice president of the National Humane Alliance, visited Vicksburg and offered a fountain to the city provided it would place the fountain on a suitable concrete foundation and supply the water.

The fountain arrived in Vicksburg in January 1908 and was eventually placed in the Monroe Street rose garden, south of the Louisiana Memorial, after months of deciding who would install it.

The Alliance’s mission was for the welfare of animals.

One of the projects of the Alliance was to provide drinking fountains to be placed where people and animals could have clean water. The fountains consisted of a base, the pedestal, the bowl made of Vermont granite and weighing five tons, and the fountainhead. The bowl was to be for horses and it furnished water flowing through three spouts, passing through lion’s headed gargoyles. Under the bowl were four spouts for dogs.

Finally, in April 1909, the city paid $117.20 for Tom Morris to install it and J.B. Smith to connect the waterline. An electric light was placed on top of the fountain, donated by Col. S.S. Bullis, the president of the Vicksburg Lighting Company. At some point the fountain was moved from Monroe Street to the triangle created by Openwood, Main and Locust streets, where it sits today.

Historical information in this article was courtesy of Nancy Bell, Vicksburg Foundation for Historic Preservation.

The Warren County Board of Supervisors on Tuesday approved a 2020-2021 budget that does not call for any tax increases... read more