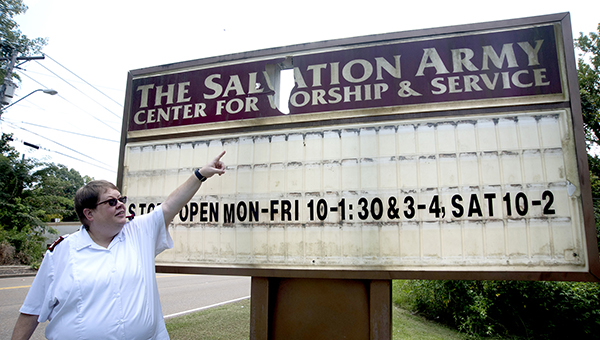 Maj. Janna Torgerson, commander of the Salvation Army in Vicksburg, points to just some of the damage on the agency’s main sign at its facility on Mission 66. The non-profit is looking for contributions to fund replacement of the sign. Torgeson said the overall cost of the project is estimated at $8,500. (Courtland Wells/The Vicksburg Post)

The Salvation Army in Vicksburg is alive and well.

However, by the looks of the damaged and worn out sign that stands on the organization’s property at 530 Mission 66, it’s easy to think they are closed. To change that, the Salvation Army is conducting a fundraiser to replace the old sign.

“The whole thing looks old and decrepit and it makes the place look like it is abandoned and that nobody is here, even though we are alive and active and helping in the community,” Maj. Janna Torgerson said.

Currently, one side of the Salvation Army’s sign is gone and the other has a small hole that obstructs part of the organization’s logo.

Prior to holding a fundraiser, Torgerson said, she applied for a grant through BancorpSouth and has received $2,500 to go toward the estimated $8,500 it will take to purchase and install the new sign.

A grant is also pending with AT&T.

The status of it and how much money the Salvation Army could receive from AT&T will be known in about two weeks. However, Torgerson said, they would still need between $5,000 and $6,000 more for the sign.

Torgerson is pushing hard and fast to raise the money. After Sept. 16 she will no longer be able to do any publicity for the fundraiser since all marketing will then be geared toward the Salvation Army’s Christmas programs.

“So I am hoping I get enough money by the beginning of October or the middle of October so we can have the sign done by November,” she said.

If not, she said, she would take money for the sign up until the beginning of November.

“But once Christmas starts it’s all Christmas,” she said.

Also, the grant money from BancorpSouth will expire Dec. 31, so Torgerson is hoping funding will come in sooner rather han later.

The new sign is being designed and made by Stewart Signs. Torgerson said they have been helping her with the project and came up with a possible sketch of what the new sign would look like.

“The sign is going to be brand new from the base up. It will have a new frame and new facing. It will also have LED lighting instead of fluorescent, which will help save money, and the sign itself is going to be bright red,” she said.

For those interested in donating toward the new sign, Torgerson said donations can be mailed to P.O. Box 1166, Vicksburg, MS 39183-1166 or dropped off at the Salvation Army headquarters.

The Board of Mayor and Aldermen Thursday got a good look at the potential cost of building pickleball courts at... read more