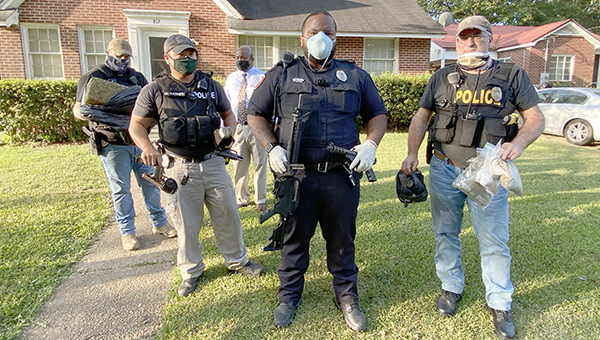 Officers with the Vicksburg Police Department display just some of the drugs and guns seized early Wednesday from a home on Central Avenue. (Tim Reeves/The Vicksburg Post)

The amount of drugs confiscated early Wednesday on Central Avenue by members of the Vicksburg Police Department is not yet known, but long-time department officials said it’s the most they have ever seen in one bust.

Shortly after daylight, officers served a search warrant on the home at 812 Central Avenue, where they not only took one person into custody but discovered a large amount of marijuana and ecstasy, along with an assault rifle and other weapons. Officers also discovered scales during the initial search.

“This team did an outstanding job. These guys work hard from sun up to sundown. They follow up on any tips they receive,” Chief of Police Milton Moore said. “Any time you do a search warrant for drugs, it’s dangerous. When you are dealing with drugs, there are guns nearby. We got a huge amount of drugs off the street.”

Lt. Johnnie Edwards said the department had received multiple tips of drug activity from the home and conducted an undercover operation.

The home was put under surveillance beginning at around 4 a.m. Wednesday and the search warrant was issued without incident shortly after daybreak for safety reasons.

Edwards also said the suspect, who will be identified later, is a convicted felon who was out on probation at the time of Wednesday’s arrest.

“It is a good amount of drugs. It’s a lot. I’ve not seen that much drugs at one time,” Edwards said.

“I have been doing this job for 20 years and that is the most I have seen,” Moore said.