Vikings go for three in a row vs. Pearl 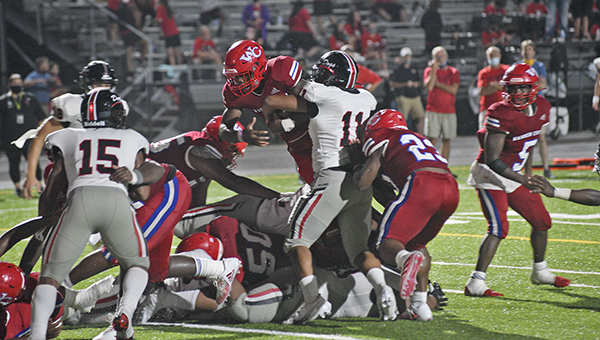 Warren Central is starting to build an impressive resumé worthy of a top-five team in Class 6A.

The Vikings have not allowed a touchdown in their first two games, and their two opponents have combined to gain 149 total yards. The special teams are helping to control field position, and the offense is playing well enough to get by.

It’s been a good two weeks on Highway 27, but there also is no time to dwell on the success. Not when every week brings a new and difficult challenge to overcome.

This week, that is Pearl. It’s the final game before the start of the Region 2-6A schedule, which includes three other teams ranked in the top five of the Mississippi Associated Press Class 6A poll. Warren Central coach Josh Morgan said the matchup with Pearl was an important checkpoint on the path of the 2020 season.

“Not only is it the next game, it’s the last game before the district run. Yes, we want to win and yes, we want to be better, but we also want a good springboard and momentum going into this district run that we all know what it’s going to be like,” Morgan said. “So it’s important for momentum and confidence, as well as trying to accomplish our goal of being the best we can possibly be going into district.”

Playing Pearl is also an opportunity to avenge one of Warren Central’s ugliest losses in recent memory. In Week 2 of the 2019 season, before a wave of injuries decimated its roster, Pearl crushed the Vikings 42-0. It was the first time in nine years that WC lost a game by 40 points or more.

Morgan said the loss helped the Vikings in the long run by exposing some weaknesses, but admitted the memory of it is still with the players and coaches who endured it.

“I don’t see how it can’t be. We were young and we didn’t play very well. Nothing went right for us that game,” Morgan said. “That’s a pretty bad taste in all of our mouths from that game. It helped us and we got better from it and responded well from it, but we took one on the chin last year for sure.”

Unlike last season, when both teams came into the game on a high, they’re on opposite paths this time.

Warren Central beat Brandon 23-3 last week for its second consecutive victory. Its offense has only gained 453 yards, but has scored 40 points. Combined with a dominant defense and the legwork of kicker Josh Griffin, that’s been plenty.

Griffin has kicked two field goals and recorded five touchbacks on eight kickoffs. The defense held Vicksburg to 69 total yards in the opener, and Brandon to 80 yards last week. It has three sacks and two takeaways, including a 29-yard interception return for a touchdown by Taylen Smith in the win over Brandon. Linebacker Jashun Simon had 10 tackles and a sack, and has 17 tackles in two games.

“I think the best thing that we’re doing right now is our tackling is good,” Morgan said. “We’re eliminating big plays, and when you can do that you give yourself a chance. We’re starting to figure out who we are and how we can win, and that’s important moving forward.”

The Vikings’ two victories have been more gritty than pretty, but Morgan added that that’s just fine by him.

“We’re all about winning. That’s how we are as a staff, and how we are as a team,” he said. “We feel like we can have a solid defense and good special teams, and a good running game. If we can do those three things, I think in that is a recipe for success if we’re really good at who we are.”

While Warren Central is winning, Pearl is not. The Pirates are 0-2 after losses to Ridgeland and No. 4 Madison Central, and have lost five of their last six games dating to the end of last season. Both losses this season have been by 20-plus points.

Morgan was not about to take them lightly, however.

“They’re a very good football team. They played two really good opponents coming out of the gate,” Morgan said. “They’ve got a lot of weapons at the skill positions on the offensive side of the ball. And defensively up front, it’s like we’ll see every week. They’ve got some really good players with some size and strength up front. So it’s a very good, quality opponent, and we’re expecting a four quarters, hard-nose football game.”