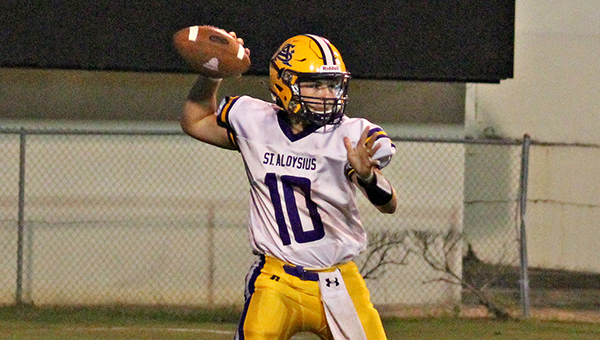 There’s an old proverb that the journey of 1,000 miles begins with a single step. For St. Aloysius, it might have started with a little bit of running.

The Flashes rushed for 178 yards and averaged 9.4 yards per carry last week against Parklane Academy. It did not lead to a victory — Parklane scored 32 points in the first half and cruised to a 38-0 win — but did provide a glimmer of hope for a young team that has not scored a touchdown in its first three games.

“We decided at halftime that we were going to focus on getting better at the run game. We didn’t throw a pass in the second half,” said St. Al coach Stacy Sizemore, who only has six seniors on his roster. “The only way to get better at football is to play the game, and we wanted to get better at establishing something. We wanted to find our identity on offense.”

St. Al will try once again to get on the scoreboard, and into the win column, this Friday when Riverfield Academy (3-1) visits Balzli Field.

Although they have been outscored 99-3 in three games, the Flashes have a 2-2 record. Hartfield Academy forfeited its 43-0 win in the season opener for using an ineligible player, and Central Hinds forfeited its game against St. Al two weeks later because of a COVID-19 outbreak.

Being .500 after four weeks, no matter how it comes about, is not a bad place to be. The on-field results don’t lie, however, and Sizemore is under no illusions that the Flashes have plenty of work to do. The goal, he said, is to string together enough small victories from play to play to enjoy success at the end of the night.

“We just talk about the process. We don’t really focus on the end result, we focus on what it takes to get there. Moving in the right direction is what we’re trying to do,” Sizemore said. “We’ve made some progress. It doesn’t show on the scoreboard, but if you looked at us in the preseason to where we are now, you see it.”

One thing the Flashes are seeing, which is not helping their cause, is a steady stream of tough opponents.

Hartfield is considered a championship contender in MAIS Class 5A. Week 2 opponent Greenville Christian might be the team to beat in Class 3A after two dozen players transferred from public schools in the Delta that opted not to play football this season.

Parklane is a playoff regular in Class 6A, and this week’s foe Riverfield is the defending Class 4A champ.

“They’re (Riverfield) a solid ballclub offensively, defensively, and in the kicking game,” Sizemore said. “They play tough, they’re physical, and they have players that play hard. They’ve got some linebackers that are as physical as anybody I’ve seen in 28 years of coaching.”

Even if they’re on their game, beating Riverfield will be a difficult assignment for the Flashes. Sizemore said, however, that finding some success — whether it’s an upset victory or merely scoring a couple of touchdowns — would help a lot.

“You want to have success. You don’t want the kids to start questioning themselves and their abilities. So it’s very important for us to have some success, even little things like last week where we were able to run the football,” Sizemore said. “It’s important so the kids will be able to have that confidence from week to week. We need to find something that’s positive to grab onto it and motivate the kids.”

Warren Central linebacker Jashun Simon had 10 tackles, including three for loss and one sack, in a 23-3 win over... read more