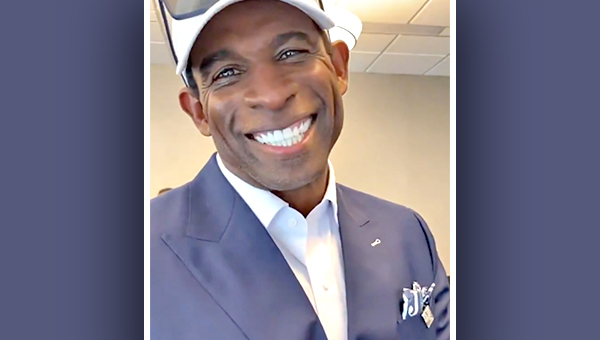 Just after breakfast on Monday morning, it was Prime Time at Jackson State.

Deion Sanders, a member of the Pro Football Hall of Fame whose iconic status goes well beyond the football field, has been hired as Jackson State’s next head football coach. Speculation that Sanders would be hired kicked up late last week, and he announced the move Sunday night on the first episode of his podcast “21st & Prime.”

“I am truly blessed to be the 21st Head football coach of Jackson State University,” Sanders said Monday. “This amazing HBCU has always enjoyed a high level of commitment academically and athletically. It’s my desire to continue this storied tradition and history of JSU and prayerfully bring more national recognition to the athletes, the university, the Sonic Boom of the South, and HBCUs in general. I am truly proud to be a part of the JSU Tiger family. I believe.”

Jackson State athletic director Ashley Robinson and acting university president Thomas Hudson both appeared on Sanders’ podcast Sunday, but the university did not formally announce that it had hired Sanders until Monday morning. The university held an event at JSU’s Lee E. Williams Assembly Center that was attended by several hundred fans and alumni as well as media.

“This is a pivotal turning point for JSU football and Jackson State University,” Hudson said while introducing Sanders on Monday. “We have an opportunity most HBCUs simply don’t come across.”

As Monday’s event began, members of Jackson State’s “Sonic Boom” marching band and cheerleaders led a police escort and a gray Cadillac SUV directly onto the arena floor. Sanders then emerged from the vehicle, wearing a navy blue suit embroidered with the Jackson State logo, a white hat and red facemask, and sunglasses.

Sanders worked his attire into his introductory speech. At one point he stepped away from the podium and opened his suit jacket to reveal several dozen smaller JSU logos sewn onto the inside.

“It’s not just a patch on the outside. I’m JSU inside,” Sanders said to a round of cheers.

The event was streamed live online, and more than 3,000 people watched. Sanders gave it the feel of a religious revival — appropriate for a once-proud program that has not won a Southwestern Athletic Conference championship since 2008 — with a fiery speech. Sanders painted a picture of a full 60,000-seat Veterans Memorial Stadium, using the football program to increase the university’s enrollment, and using his own celebrity to aid other sports in their recruiting.

It is the first time Sanders has been a head coach at the college level, although he has coached high school teams for more than a decade. He is currently serving as the offensive coordinator at Trinity Christian School in Cedar Hill, Texas. He plans to finish this season at Trinity Christian — two of his sons play there — before taking over at Jackson State, which has postponed its season until the spring. The Tigers’ first game is Feb. 21, at home against Edward Waters.

Sanders’ high school team has two former Vicksburg High players on it — defensive back Marvin Martin and offensive lineman Shar’dez Taylor — who transferred there over the summer. Trinity Christian also opened its 2020 season by coming to Mississippi to play Madison-Ridgeland Academy in August. MRA beat Trinity Christian 27-26 on a touchdown in the final minute of the game.

Sanders, 53, is Jackson State’s fourth head coach in seven years — and the 21st in the program’s history, which is fitting since he wore No. 21 during his playing days. He replaces John Hendrick, who did not have his contract renewed after going 6-9 in one full season and part of another.

Hendrick was paid $380,000 per season on a two-year contract signed in December 2018. Details of Sanders’ contract were not immediately available.

On his podcast, Sanders talked about creating a “Power 5 atmosphere” inside Jackson State’s program, from practice schedules to the way they dress while traveling to road games.”

“They deserve a Power 5 experience at an HBCU, and I’ll be darned if I’m not going to apply the pressure to give it to them,” Sanders said.

Sanders, who played 14 NFL seasons with five teams, was inducted into the Pro Football Hall of Fame in 2011. He won two Super Bowls, in 1994 with the San Francisco 49ers and in 1995 with the Dallas Cowboys, and is certainly the most high-profile hire of Jackson State’s recent coaches — and possibly ever.

Nicknamed “Prime Time” for his flashy play and lifestyle during his NFL career, Sanders had 53 career interceptions and returned nine for touchdowns. He scored another nine touchdowns on punt and kickoff returns, many finished off with a signature high step into the end zone. He is often considered one of the best cornerbacks in NFL history.

has remained highly visible in his retirement as a television analyst for NFL coverage on CBS, NFL Network and Barstool Sports.

Sanders, a Florida native and former Florida State star, has no ties to Jackson State, but said on his podcast that “God called” him to take the job.

“Why not? Isn’t this the time? Isn’t this the moment? Isn’t this what’s needed? Like (Hudson) eloquently said, it’s a match made in heaven,” Sanders said. “This is a God move. When they pulled up today, I said for me to leave this it has to be God,” Sanders said with a laugh. “A lot of people are going to say, ‘Why?’ I’ve been offered pro jobs. I could be an assistant at any college and a head coach at any other college, but at such a time as this God called me to Jackson State and me to these men.”

Hudson said he expects Sanders’ impact to go well beyond the football program — and well beyond Jackson State.

“It means a lot to us. You hear a lot about people taking a second look at HBCUs. You have a lot of people giving donations to HBCUs, but this was more than that,” Hudson said. “This was someone who was willing to give their time and their space, and really be in the space of an HBCU. It’s someone who wants to engage with our students, be a part of our alumni, and be a part of the JSU family. That means a lot. We’re really, really excited about that.”

Sanders acknowledged that role as an ambassador for Historically Black Colleges and Universities, and embraced it.

“This is what I’ve been doing my whole life. I’ve been called to take things to another level. What God is calling me to now, I’m ecstatic. It’s my people that I get to touch,” Sanders said. “The multitude of parents are the same age, the same demographics, and just to look into these kids’ eyes for the last multitude of years coaching youth sports and high school, it’s phenomenal. I can’t wait to touch the grass, man. I can’t wait to put that whistle in my mouth, to start drawing up plays.”