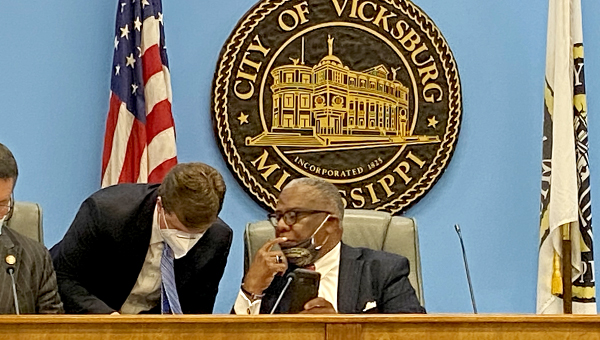 Mayor George Flaggs Jr. speaks with his chief of staff Sam Andrews prior to Friday's Board of Mayor and Aldermen meeting. (Tim Reeves/The Vicksburg Post)

The city of Vicksburg moved ahead with the long-debated project for a new animal shelter Friday with the acceptance of a piece of property where a new shelter could be built.

During the Board of Mayor and Aldermen meeting Friday, city leaders agreed to accept 1.9 acres of property at 4845 Highway 61 South that is being donated by Ernest Thomas. The property is just north of Mid-South Lumber and Supply on U.S. 61 South. The city also accepted the donation from Mary Jane Wooten of property on Gordon’s Alley for the development of a dog park.

Both donations were accepted contingent on needed due diligence.

“We have a really good site, it already has a building on, with additional land for additional shelter purposes. The due diligence, just like we have to do on any other piece of property, even though it is being donated, must be done. From the outside, though, it looks really good,” South Ward Alderman Alex Monsour said. “This serves the purpose of what we need, and at the same time, we think we can move forward with it and afford it.

“We have said all along we wanted to do something with the animal shelter because the animals need a better facility and we understand that but do so within our means,” he said. “We think we can move on this and be able to accomplish the goal of having a great shelter.”

Mayor George Flaggs Jr. said accepting the donation is just the first part of a multi-phase effort for a new shelter.

Phase one, which includes accepting the property, also includes a title search, environmental research, survey, evaluating utilities and other due diligence with the goal of closing on the property by December or January if everything is “favorable.”

Flaggs also identified that phase two of the project would be to hire an architect to design improvements on the inside of the existing building on the property.

Phase three would be advertising for construction bids for the needed work.

“It sounds good at this point. It is a work in progress,” Flaggs said following Friday’s meeting. “Hopefully, this will be the last hurdle for us to move forward as we always intended. At the same time, I have every intention to make sure we can afford whatever we build.”

The news of the donation and the city’s phased plan for moving forward with a new shelter was welcomed news to shelter advocates, some of who had planned an Oct. 1 event protesting the city’s apparent lack of action.

Diane Gargaro, who had led the effort to organize the Oct. 1 protest, said Friday afternoon that the event has been postponed, for now.

“In light of the fact the mayor has accepted a piece of property for a new shelter, and to give them time to to do what needs to be done to ensure the property is suitable for the long term, I feel we can hold off on the rally planned for Oct. 1,” Gargaro said. “We will revisit this in a few months to see if there has been forward motion towards the new shelter.

“If by, say February, nothing is happening, we will once again plan to let the mayor and board know we are not going away. Thank you all for your support,” she said. “Let’s continue to do what’s right for the animals and Vicksburg.”