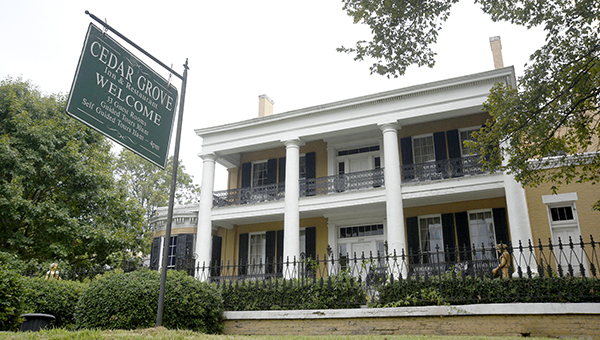 “It was perfect. Everything was set. We had all of the rooms booked,” Hannah Holliman said. “I didn’t think we would ever have to start all over again.”

Holliman, and her fiancé, Tim Parris, should have been making the final decisions ahead of their Oct. 17 wedding in Vicksburg. Now, with the closure of the Cedar Grove Mansion Inn and Restaurant, the couple is back to square one. “I really don’t know what we are going to do,” she said.

On Sept. 21, the iconic Vicksburg bed and breakfast was sold, leaving employees and those who had reservations little notice. The previous owners, 2200 Oak Street LLC, a subsidiary of Pride Hospitality, based in Germantown, Tenn., laid off the facility’s employees and canceled all reservations and events after the close of the sale.

Cedar Grove had been on the market for about six months before being purchased by THEP Corporation.

The new owners, who are Vicksburg natives, said they are “direct descendants of the Klein family,” the original owners who built the mansion. The new owners have yet to give details on what they plan to do with the facility or a timeline.

According to the Mississippi Secretary of State’s website, THEP Corporation was incorporated in May and lists Thomas Hughes as the registered agent. Hughes, who is the company’s CEO, lists a Drummond Street address.

“We had it on the market for quite a long time. We got an offer and the (new) owner(s) wanted to close on it very quickly, which we did and then the owners decided they wanted to close the business for renovations,” Pride Hospitality President Mark Zipperer said. Zipperer also was the owner of the facility under 2200 Oak Street LLC.

Pride Hospitality owns and operates primarily brand hotel operations in Wisconsin, Texas, Ohio, Florida, Indiana, Missouri and Mississippi, including the Holiday Inn Express and Suites in Clinton. Cedar Grove appeared to be the only bed and breakfast-type property listed in the company’s portfolio.

“I believe that the sale is the best thing for that asset and the city of Vicksburg because the owners are genuinely interested in making this property the best it can be. Because they have a connection — a personal connection — to the property,” Zipperer said. “This is a property that really needs to be owned and operated by the owners and that is what is going to happen with these owners. I wanted to make sure we sold it to somebody that preserved the property in the sense that it was going to be there a good long time for the city of Vicksburg and the property.”

For Holliman and Parris, they too felt the former owners of the facility left them dangling throughout the pandemic, as they were slow to respond and answer questions. Holliman said the couple reached out to Cedar Grove to delay their wedding until January because of restrictions on gatherings due to the pandemic.

Only Friday, when a former employee at the facility finally returned a message, did the couple learn the facility had been sold and all events canceled. This also left the couple without a non-refundable $1,000 deposit.

Zipperer said the postponements and delays of weddings and other events, along with the near halt of international visitors to Vicksburg, led to dismal revenues at the facility.

Zipperer’s company purchased Cedar Grove Mansion in January 2018. He said the economic hardships on the facility did not start with COVID-19, but with the arrival of a competitor.

“Certainly, COVID had a lot to do with it. It became unprofitable. But what really had a lot to do with it was when Margaritaville opened the hotel and did not open a casino,” he said. “They flooded the market with hotel rooms downtown and our rates went two-thirds of what they were because Margaritaville was selling $89 rooms instead of us selling a $159 room. So, that’s what really kind of hurt us more than COVID, but the fact that COVID has extended beyond what we all forecasted also did not help.”

Cedar Grove’s history goes back to the mid-1800s.

Planter and businessman John Alexander Klein began building Cedar Grove in 1840 and completed it in 1852.

During the Civil War, the home took a hit from a cannonball that is still lodged in the parlor wall, and the building was used as a Union hospital.

The mansion was saved from the wrecking ball in 1960 by the Vicksburg Little Theatre, which used it as a theater for plays until 1981 when the Parkside Playhouse on Iowa Street was built. Cedar Grove was sold to Herbert and Terry Kinsman in 1981 and began serving as a bed and breakfast in 1982.

Mackey sold Cedar Grove in 2003 to GPS Investments based in Natchez, who then sold it to 2200 Oak Street LLC.

In September 2015, The Post published an article saying GPS Investments had been attempting to sell the facility for as long as four years but had little interest from buyers. At the time of the article, GPS Investments had listed the home with Sotheby’s with a price of $1.9 million.

Zipperer confirmed the company had sold off the facility’s cottages to Dr. Steven and Kendra Reed, who also own nearby property and McRaven House, months ago.

The recent transaction included the remaining property “which is everything inside the walls,” Zipperer said. That included the Riverview suites, the chapel, mansion, carriage house and pool house. In all, the sale included an estimated 3.5 acres.

The financial terms of the sale were not disclosed.