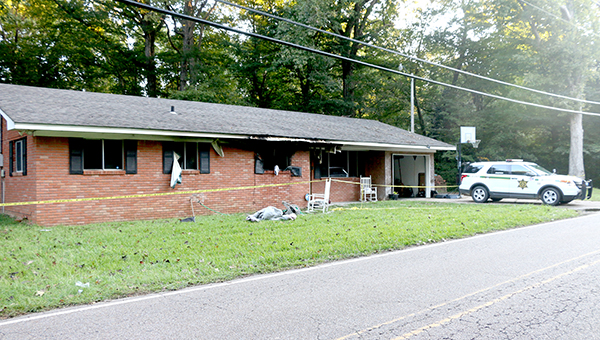 An early morning fire Tuesday claimed the life of a child despite the heroic efforts of first responders at the scene.

Kealen Andrews, 6, was pronounced dead at the scene by Warren County Coroner Doug Huskey. The cause of death was listed as smoke inhalation.

Andrews was a first-grade student at Beechwood Elementary School.

Emergency units were called just after 1 a.m., to a house fire at 6613 Halls Ferry Road with people possibly trapped in the home.

Warren County Fire Coordinator Jerry Briggs said sheriff’s deputies Dustin Keyes and Michael Rainey arrived first at the scene to find one person in the house and a man hanging out a window but could not reach either person because of the intensity of the blaze. Warren County Sheriff Martin Pace said the deputies crawled on the floor of the house in an attempt to get to the child and the man “but the flames pushed them out.”

Briggs said Fisher Ferry firefighters arrived shortly after the deputies and were able to get the man who was hanging out the window and the body of the child in a bedroom. He said the child’s mother and sister were also in the house when the fire started but were able to get out. He said the man in the window was a passerby who stopped to help and went inside the room of the house that was on fire.

“He was actually trying to put the fire out with a water hose and became overcome with smoke and could not get back out of the structure,” Briggs said. “He was hanging out the window to try to get air.”

He said units from the Fisher Ferry, Letourneau and Culkin Volunteer Fire departments responded to the fire. He said members of the Warren-Yazoo Mental Health Crisis Team were also at the scene to be with the family and later went to the fire station to offer help to the firefighters.

Briggs said no firefighters were injured and Keyes and Rainey were taken to Merit Health River Region where they were treated for smoke inhalation and released.
The cause of the fire is undetermined and Sheriff’s Office Investigator Sam Winchester, working in conjunction with the State Fire Marshal’s Office, continue to investigate the cause of the fire.