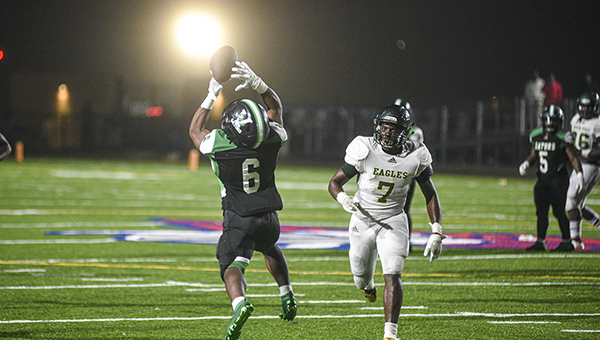 For a day, maybe two, the Vicksburg Gators got to bask in the glow of a thrilling come-from-behind victory that put them in the win column for the first time this season.

By the time Saturday rolled around, coach Todd McDaniel said, he firmly informed his players that that was enough of that.

“I explained to the kids that that game is over and it’s on to Neshoba,” McDaniel said. “We went back to work. Detail. Practice. A lot of running.”

The Gators (1-3) did indeed have little time to enjoy their 23-22 win over South Pike. This Friday they have undefeated Neshoba Central (4-0, 1-0 MHSAA Region 2-5A) rolling into town. The Rockets are ranked No. 3 in the Mississippi Associated Press Class 5A poll, and a re possibly the toughest opponent remaining on Vicksburg’s schedule.

The game will be played across town at Warren Central’s Viking Stadium — Memorial Stadium is still undergoing renovations — which will only add to the difficulty, McDaniel said.

“They’re a very good football team, and our home games are technically not our home games,” McDaniel said. “Their running back is everything they’ve said he is. Our work is cut out for us.”

The good news for Vicksburg is that it appears to have turned a corner after starting the season with back-to-back shutout losses. The Gators ran for 379 yards in a 34-32 loss to Natchez, and had 239 yards against South Pike.

Last week, they scored on their final four possessions to overcome a 22-0 deficit in the last 16 minutes. Chris Williams made a 25-yard field goal as time expired to win it.

McDaniel said the improved offensive output the last two weeks is a sign the Gators are beginning to grasp the Wing-T offense that they installed during the offseason.

“It’s a learning curve. We’ve gotten better and better every week, and it was good to find success,” McDaniel said. “Wins are not easy to come by, and we’re starting to build back the tradition of this program.”

McDaniel also noted that the offense’s success is complementing a defense that has been solid for most of the season. The Gators have allowed 100 points in four games, but some of that was caused by turnovers deep in their own territory or the offense’s inability to stay on the field the first two games.

Two of South Pike’s three scoring drives started on Vicksburg’s side of the 50-yard line. After falling behind 22-0 midway through the third quarter, however, the Gators only allowed three first downs on South Pike’s last three possessions. They forced a turnover on downs in the third quarter, and a three-and-out to set up the game-winning drive late in the fourth.

A strong running game that can eat the clock and keep opponents — especially high-powered offensive ones like Neshoba Central — off the field, thus allowing the defense to rest a bit, will be a major asset heading into the Region 2-5A schedule.