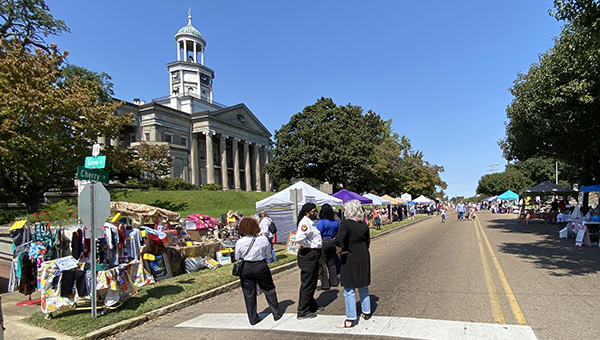 For 10-year-old Bella McGahey, tending a booth at The Old Court House Museum Flea Market is a family tradition.

Saturday, McGahey, the youngest vendor at the fall flea market, helped customers, made sales and spent some of her profits on crucial business items such as a hamburger and a funnel cake.

McGahey joined her parents, grandfather and other family members, selling items under the large magnolia tree next to the Warren County Courthouse at the corner of Cherry Street and Grove Street.

“It’s been fun,” she said. “We’ve had a lot of customers probably because the weather has been so nice.”

The weather for the semi-annual event was ideal even if having the flea market in the midst of a pandemic was not. Officials with The Old Courthouse, who traditionally organize a spring and fall flea market were limited to just one this year after the spring event was canceled.

Dozens of vendors, offering everything from clothes, hand-made knives and crafts, to those offering antiques and even hot sauce, lined the streets surrounding the Old Court House Museum.

Those attending Saturday’s event were urged to wear masks and adhere to social distancing. But those rules did not appear to hinder the size of the crowd, as hundreds turned out in picture-perfect weather.

Louise Traxler, and her daughter, Peggy Henry, from Carlisle in Claiborne County, are regulars at the flea markets. Louise, who said she has been doing shows for 60 years, said she was among the vendors at the first flea market at the Old Court House when the vendors were set up “up on the hill” around the museum. “This is a lot easier today,” Traxler said.

Henry said the pair were late setting up, and still were not able to set up fully because they were so busy helping customers who were interested in the plants, antiques and fall decorations that adorned their space.

“It’s been really good,” Traxler said shortly after noon Saturday. “We are kind of surprised by the turnout because of the virus. It’s been a good day.

“The weather has been perfect. We have been really busy,” Henry said.

The spring and fall flea markets — which are traditionally held each April and October — are the major sources of funding for the museum and usually features more than 100 booths surrounding the courthouse square.

Fulcher honored to be among finalists to decorate Governor’s Mansion