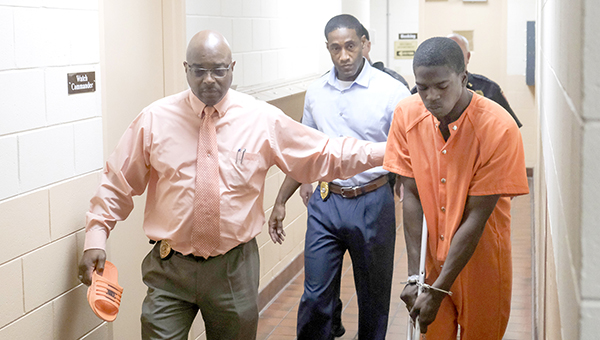 Elijah Eugene Qualls Jr., 21, right, is escorted into Vicksburg Municipal Court in September 2019, where he was charged with second-degree murder in the shooting death of Dematric Lamar Clark. Qualls, who was out on bond, was shot in the torso Sunday on Martin Luther King Boulevard.  (Courtland Wells/The Vicksburg Post, file photo)

Information about Sunday afternoon’s shooting on Martin Luther King Boulevard remains scarce as investigators continue their work. But more information is coming out in regards to the victim of the shooting.

Shortly after 5 p.m. Sunday, officers with the Vicksburg Police Department were dispatched to the 1400 block of Martin Luther King Boulevard for a shots fired call. When they arrived, they were told the victim, Elijah Eugene Qualls Jr., 21, was being taken by personal vehicle to Merit Health River Region with a gunshot wound to the torso.

Department officials said the shooting stemmed from an altercation between Qualls and “one or two other individuals.” They said it is one of those individuals that is believed to have fired the shot that wounded Qualls. But, details on the number of individuals, or descriptions of the suspects have not been made available.

Information on Qualls’ condition was not available.

At the time of his arrest, Elijah Qualls was also facing charges of aggravated assault in connection to the June 22, 2019 shooting of a man on Mississippi 27 south of Beechwood Elementary School.

In April, Elijah’s bond was reduced by Circuit Court Judge M. James Chaney to $500,000. Judge Chaney again reduced the bond on June 8 to $250,000. Elijah was released from the Warren County Jail on July 2 after posting bond.