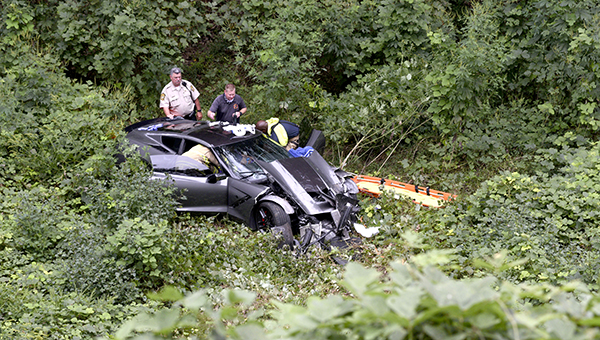 First responders work to remove Patrick Belden from his 2016 Corvette after a head-on collision Sept. 23 on Culkin Road. Belden was taken to Merit Health River Region and then by helicopter to University of Mississippi Medical Center. Belden died as a result of his injuries Friday. (Courtland Wells/The Vicksburg Post)

A two-vehicle accident in late September along Culkin Road has proven deadly as one of the individuals injured in the wreck died Friday.

According to Warren Coroner Doug Huskey, Patrick Belden of Vicksburg died as a result of injuries suffered during a head-on collision on Sept. 23.

At around 4 p.m. on Sept. 23, a Ford F-150, driven by Steven Collins, 67, was eastbound on Culkin Road when according to Warren County Sheriff Martin Pace the truck suffered a malfunction to the front left tire that forced it into oncoming traffic where the truck hit a 2016 Corvette driven by Belden head-on. Belden’s car left the road and went down a steep ravine on the south side of Culkin Road.

Units from the Vicksburg Fire Department and the Culkin Fire Department responded and were forced to use a rescue basket to pull Belden up the hill. He was transported to Merit Health River Region and then flown by helicopter to UMMC. He was at UMMC when he died.

Collins also was transported to Merit Health River Region for treatment but was also taken to UMMC later that day.