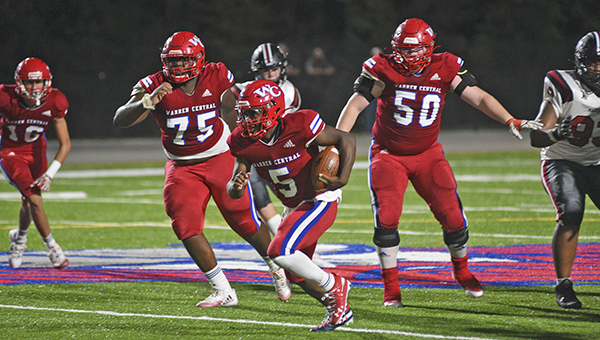 One of the benefits of winning, Warren Central head coach Josh Morgan likes to point out, is that it leads to bigger and more important games down the road.

They don’t get a whole lot bigger and more important than the one the Vikings have this week, however.
Madison Central (4-1, 2-0 Region 2-6A), a perennial Class 6A power, comes to Viking Stadium on Thursday night. It’s not only a chance for No. 3 Warren Central (4-0, 2-0) to stop a five-game losing streak against its frequent nemesis, but a pivotal game in the Region 2-6A standings as well.

The game was moved up one day to Thursday at 7 p.m. because of the threat of bad weather from Hurricane Delta.

“Our goals have to be flexible and adjustable. With that in mind, the thing about winning big games is the next games get bigger and bigger. Our team has been able to set themselves up to where the next game is that much bigger and the stakes are that much higher,” Morgan said. “It’s a one-game season for us, and we have an opportunity to remain on top. That’s what we’re focused on. We’re not thinking about anything else.”

Madison Central vs. Warren Central has often resulted in competitive games — four meetings from 2016-18 were decided by a total of 16 points — but a lopsided series. Warren Central’s last win over the Jaguars was in 2015. It has lost 14 of 16 against them since 2006, including two playoff games. Madison Central won last year’s meeting, 28-7.

“We’ve played good, we’ve done some good things, but they found a way to win,” Morgan said. “When you play Madison, you’re going to have to beat them. They don’t beat themselves. So we have to focus on that. We have to beat them and find ways to win.”

Much like in years past, this game will have a big effect on the Region 2-6A playoff race. The winner can practically guarantee a spot in the postseason and start plotting a course toward a home game in the first round. The loser will face a difficult road where it might have to win the rest of its games to be one of the fortunate four to advance.

“With the exception of last year we’ve been in some very tight ballgames with them. It’s usually just a really good football game. The trend we’re trying to buck is, the last several years they’ve been the ones to come out on top,” Morgan said. “We’re still trying to find a way to be there at the end but also be able to pull it out. It’ll be a benchmark for the season.”

Beating Madison Central is never easy, and Morgan said this year appears to be no exception. The Jaguars are allowing only 12 points per game and have a staunch run defense.

Warren Central, meanwhile, is allowing 8.5 points per game and has an offense that is reliant on the run. Offensively, the Vikings are averaging about 185 rushing yards per game. Three players have more than 140 yards apiece, led by quarterback Kentrick Thompson (346 yards, four touchdowns).

Morgan said figuring out a way to run the football when Madison excels at stopping it will be a key to the game.

“They do a really good job of trying to take away the run, and that’s one of our strengths,” he said. “I know they’re going to put more of an emphasis on stopping the run than they normally do. We still have to be able to run the football at them. We have to be who we are. We can’t change who we are, so we have to be good at what we do and that’s going to be strength on strength. We have to make sure we’re able to take on that challenge.”

The other big challenge will be figuring out how to come up with those one or two big plays that have eluded the Vikings against Madison Central, and that often tip the balance in favor of the Jaguars. Madison Central scored the winning points in the final minute of regulation or overtime three times during its current five-game winning streak in the series.

“In a game like this, when you’re playing good people, in a tight ballgame with teams that are fairly matched, it’s usually one or two plays. You just don’t know when those plays are coming,” Morgan said. “It makes you pay attention to every snap, every rep, every series. We have to have that mindset on every play. We have to make sure we have relentless effort all night long, and have our guys prepared the best we can and be a smart football team.”

St. Al suddenly in the thick of a playoff chase

A week or two ago, the St. Aloysius Flashes were talking about finding moral victories and thinking about playing out... read more