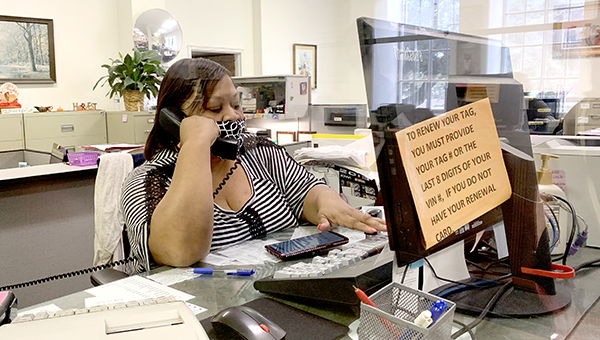 Eunice Robinson, a deputy clerk at the Warren County Tax Collector's office, talks with a taxpayer on the phone Thursday afternoon. The office received numerous calls throughout the day Thursday as taxpayers who are due to renew their car tag in October received renewal notices with amounts far higher than they should have been. (Courtland Wells/The Vicksburg Post)

It’s amazing the difference a decimal point can make.

For as many as 1,500 residents of Warren County, that decimal point is creating havoc when it comes to their efforts to renew their car tags.

According to Warren County Tax Collector Antonia Flaggs-Jones, her office started receiving phone calls Thursday from residents who had received tag renewal notices with amounts far higher than they should be.

Flaggs-Jones said the problem stemmed from a third-party vendor who works with the county on mailing out renewal notices. The vendor pulled the wrong property tax millage rate from the Department of Revenue database. In this case, the millage rate for Warren County is .013096, while the millage for the city of Vicksburg is 0.016659.

She said the notices pulled the millage rates but left off the first zero, which forced some car renewals as high as nearly $5,000 — as much as 10 times what it should have been.

“The company did not send us a file to review before sending out the notices,” Flaggs-Jones said. “It appears that all of the cards that went out to residents needing to renew their car tags in October were wrong.”

Flaggs-Jones, who declined to name the company, did not know the exact amount of renewals affected but said she estimates as many as 1,500 could have been sent out wrong.

Even though the mailed out renewals are incorrect, the amount in the system and available online is correct. Anyone with a questionable renewal amount can pay the correct amount online or call the Tax Collector’s office for the correct total.

Flaggs-Jones said she did contact the Department of Revenue Thursday when she first learned of the problem. She said at this point, she does not believe there is a need to resend the notices, as that might lead to additional confusion among residents.

Those with questions about their tag renewal should call the Warren County Tax Collector’s office at 601-638-6181.

A Warren County woman reportedly shot in the abdomen by her grandson on Sept. 25 has died. Officials confirmed that... read more