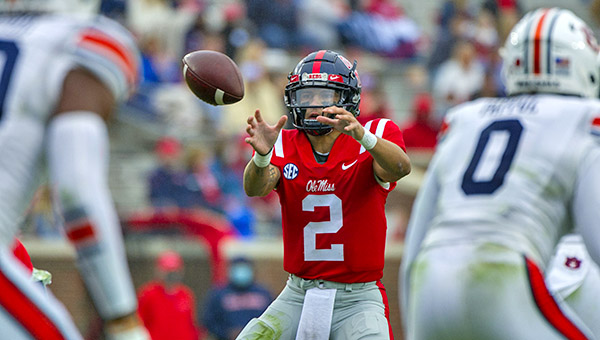 Ole Miss quarterback Matt Corral (2) takes a snap against Auburn on Saturday. Corral ran for two touchdowns and threw for another, but Auburn beat the Rebels 35-28. (Justin Ford/USA TODAY Sports)

“Bo (Nix) and Seth (Williams) have a special bond,” Auburn coach Gus Malzahn said. “It was down to the end and that’s the way this series has gone.”

Auburn (3-2) rallied from a 28-27 deficit on its final offensive series, covering 80 yards in six plays — all after getting a controversial break.

After Ole Miss scored to take the lead on a 5-yard run by Jerrion Ealy, Auburn’s Shaun Shivers appeared to have the ensuing kickoff deflect off his hand. The ball rolled into the end zone, where Ole Miss recovered it, but officials said it was not touched, blew the play dead and called it a touchback.

Officials said they reviewed the play on replay, but the game was not stopped.

“They said they did (review it). You don’t really challenge anymore in college because they review everything, supposedly. So I go to the guy and he said they looked at it and said they didn’t see anything,” Ole Miss coach Lane Kiffin said. “Even when they don’t stop it, they’re still looking. Now why they didn’t stop and look closer, I have no idea. That’s equivalent of a scoring play which they stop all the time now forever. Someone said his finger definitely moved, but, whatever.”

Auburn and Ole Miss exchanged punts, and Auburn got the ball back with 2:25 to go at its own 20. Nix completed a pair of passes and the Tigers converted a third down to move the ball to the 42-yard line. Then Williams, who finished with eight catches for 134 yards, caught Nix’s pass in front of the Auburn sideline, twisted away from two tacklers and turned up the sideline to easily race for the decisive touchdown.

“I looked around to see who was around me, and I saw the end zone and kept running,” Williams said. “That last drive, everybody just came out with the mindset that we weren’t going to lose.”

Ole Miss (1-4) reached the Auburn 29-yard line in the final 10 seconds and a timeout. Tight end Kenny Yeboah dropped a pass at the 10-yard line, and then quarterback Matt Corral advanced past the line of scrimmage before throwing a desperation pass on the final play. Corral’s throw was intercepted anyway.

Corral had touchdown runs of 5 and 10 yards and was 16-of-27 passing for 154 yards, including a 6-yard touchdown to Elijah Moore. Jerrion Ealy had a 5-yard touchdown run to give Ole Miss a 28-27 lead with 5:43 left, setting up Auburn’s game-winning drive.

“There’s no pixie dust, you know? You’ve got to make more plays than they do and execute the situation,” Kiffin said. “That’s what winning teams do. It’s a very disappointing loss. Tough to swallow because it was right there.”

Tank Bigsby had touchdown runs of 4 and 18 yards and finished with 129 yards on 24 carries as the Tigers finished with a turnover-free 462 yards of total offense. They were 4-for-4 in the red zone.

Nix finished 23-of-30 passing for 238 yards, with the biggest plays reserved for Williams. Shivers and Nix had touchdown runs over 1 and 4 yards, respectively.

“We knew with two minutes and 30 seconds, we could go down and make big things happen,” Nix said. “Seth made a great play. We just never lost hope.”

Letter to the Editor: The Stars shined in Vicksburg