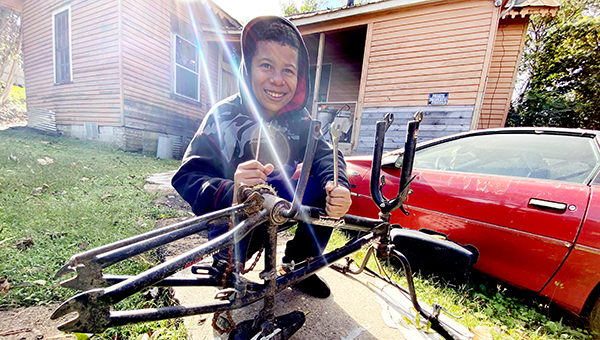 Kofi Louis, a student at Vicksburg Junior High School, was the victim of an armed robbery Monday. An unidentified black male stole Kofi's bike at gunpoint near the intersection of Fairgrounds and Pearl streets. (Tim Reeves/The Vicksburg Post)

Community starts to rally around teen who was robbed at gunpoint

Kofi Louis, a seventh-grade student at Vicksburg Junior High School, is a boy who smiles, who plays and who likes to fix things, including bikes.

On Monday, the 13-year-old was the victim of an armed robbery that has left him shaken and rallied the community to his aid. An unidentified black male took Kofi’s bike and when he tried to fight back to keep it, the man pulled a gun. All Kofi could do, he said, was “drop.”

“If they had wanted a bike, Kofi would have given him one,” said his sister Alicia, a senior at Vicksburg High School. “He’s fixed up bikes before and given them away. They didn’t need to steal his.

“I really hate that this happened and Kofi, he’s been working on bikes for years. He is such a handyman,” she said. “Any bike frame he finds, he will fix it up like new. He has given a lot of friends bikes that he fixed up because they didn’t have one.”

Officials with the Vicksburg Police Department have continued to investigate Monday’s incident. They do not yet have a suspect despite their best efforts and the efforts of Alicia to help her brother identify the man.

Alicia said her brother’s fear has lingered after the robbery. In addition to the bike, the robber took Kofi’s speaker, headphones and keys.

“He has been a bit skittish the past few nights knowing they have his keys,” Alicia said. “Last night, he slept with a bat between his knees.”

According to the police report, Kofi was pushed off his bike by the suspect around 5:30 p.m. Monday. When Kofi tried to get his bike back, that is when the suspect pointed the gun at him and rode off. The incident took place near the intersection of Fairground and Pearl streets.

The bike that was stolen was a white and blue bike, with 26-inch wheels, that Kofi had fixed. “It was practically new,” he said.

Sadly, this is not the first time Kofi has had a bike stolen.

“He’s had multiple bikes stolen. He even had a brand new one stolen when he was little,” Alicia said. “He had just gotten that one for Christmas.”

Since the incident, Alicia said people have reached out to her and her family offering their apologies that Kofi was robbed. She has also set up a Gofundme at www.gofundme.com/f/get-kofi-a-new-bike to raise money to get her brother a bike.

Out of the scary situation, Alicia said, she has seen a silver lining.

“I feel like this is bringing the community together, finally,” she said. “It’s just so many bad things that have happened and I am so thankful for the community to come together and make a difference. It’s just the little things a community does.”

Kofi and Alicia are the children of Michael Louis and Agnes Donaldson. Alicia is a student at Vicksburg’s Health and Human Services Academy and wants to pursue a career in forensic pathology. She is a member of the band at Vicksburg High School and plays the tenor saxophone.

Flag to fly over Old Highway 80 Bridge in honor of naval service, retirement

In honor of his retirement from the U.S. Navy, Christopher Rials’ family did something special, something that can be seen... read more