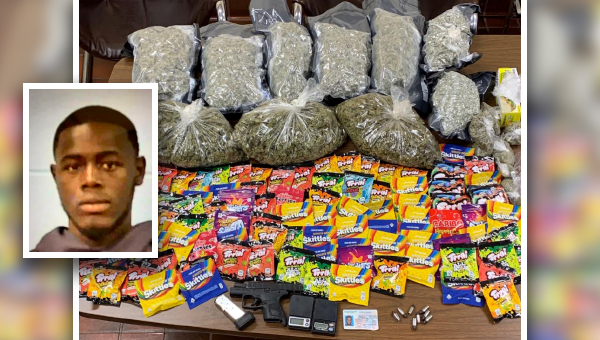 A traffic stop Sunday morning led to the arrest of a Vicksburg man and the discovery of more than $45,000 in drugs.

Just before 11:30 a.m. Sunday, officers attempted to stop a red Chevrolet Impala driving recklessly near the intersection of Lane Street and Military Avenue.

The driver refused to stop and led officers on a chase from that intersection to Interstate 20 eastbound. During the chase, the driver attempted to jump from the interstate onto South Frontage Road near the Dixie Plaza shopping center. The attempt failed and the car was disabled.

The driver, identified as Christopher Galloway, 24, jumped from the vehicle, carrying with him a backpack as he fled.

The brief foot pursuit ended when Galloway was captured behind a commercial building on North Frontage Road beside the Wisconsin Avenue overpass.

In the backpack, officers discovered three gallon-sized baggies of high-grade marijuana. Seven more bags were found in the trunk of his car, along with some smaller bags of marijuana.

In addition to the marijuana, officers seized 100 bags of edible marijuana candy, two digital scales and a Beretta 9mm handgun.

Galloway was charged with trafficking and felony eluding in addition to misdemeanor warrants already on file. During his initial court appearance Monday, Judge Angela Carpenter set Galloway’s bond at $200,000 and bound his case over to the grand jury.

Varner: Flag is going to make a lasting change forever

There is a responsibility that comes with helping make change. Many will be supportive of the new ideas, while others... read more