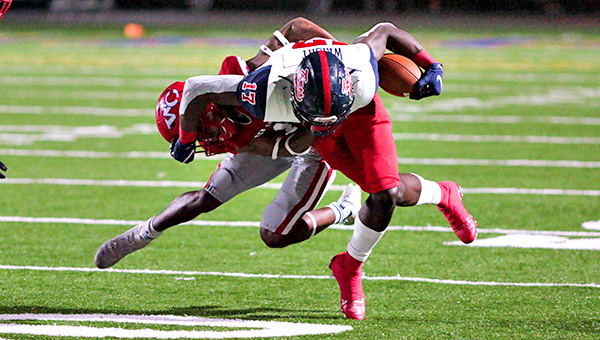 South Panola wide receiver Cameron Wright (17) gets tangled up with Warren Central cornerback Tevin Bell during Friday’s game at Viking Stadium. South Panola and Warren Central are among five teams in Region 2-6A who could end up tied for first place after this week’s games. (Walter Frazier/For The Vicksburg Post)

Four Down Territory: Region 2-6A is a tangled mess, Ole Miss’ offense is good and Mississippi State’s is not

You’re in Four Down Territory. Each week we’ll break down four notes, nuggets, stats and trends from the weekend that was in Mississippi high school football, college football and the NFL.

1
It could have been so simple. And it still can be. Figuring out all of the scenarios in the MHSAA Region 2-6A playoff race in the final week of the regular season, however, is less about X’s and O’s and than it is crafting an equation that solves for X.

Clinton, Warren Central, South Panola, Starkville and Madison Central are all in contention for four playoff spots. The only game on the league’s schedule this Friday is Starkville at Clinton, which will determine who is in, who is out, and who goes where when the Class 6A playoffs begin next week.

If Starkville wins, it will create a five-way tie for first place that requires a calculator to figure out. All five teams would have a 5-2 league record, as well as 2-2 records against each other. The tie would then be broken by the third tiebreaker, which is point differential in the head-to-head meetings among the five teams.

Madison Central is the big beneficiary from a Starkville victory. It would vault all the way to the region championship with a plus-8 point differential. Warren Central, at plus-7, would finish second, and either Clinton or Starkville would be third and fourth depending on the final score of their game. Starkville gets the No. 3 seed if it wins by five our more points, and Clinton hangs on to the No. 3 seed if it loses by four or less.

Starkville currently has a minus-6 differential, and there is a 12-point cap on single-game results. Clinton has a plus-3 differential heading into Friday’s game.

If Starkville wins, South Panola is the odd man out and its streak of 18 consecutive playoff appearances will come to an end.

The good news for Warren Central is that it is in the playoffs no matter what happens, and can even earn a first-round home game despite having lost its last two games. The Vikings fell 36-35 to South Panola in double overtime last week, costing them a chance at their first outright region title since 2004.

2
Ole Miss had an offensive game for the ages Saturday.

Corral completed his first 19 passes for one Ole Miss record, and threw six touchdown passes to tie another. He finished 31-of-34 for 412 yards, and his 91.2 percent completion rate tied the SEC mark with 30 or more pass attempts.

Corral’s six touchdown passes were the most ever by an Ole Miss quarterback in a regulation game. Eli Manning threw seven in a 2001 win over Arkansas, but five of those came in overtime of a game that had seven extra periods.

On Monday, Corral was named the SEC’s Offensive Player of the Week.

Moore, meanwhile, joined A.J. Brown as the only Ole Miss players to have multiple 200-yard receiving games in their career. He broke Brown’s single-game yardage record that had been set in 2017.

As a team, the Rebels produced 35 first downs and 641 yards of total offense. The first downs fell one shy of the school record, while the yards were the second-most ever in an SEC game. The Rebels had 647 yards against Alabama earlier this season.

3
While Ole Miss’ offense was lighting up the scoreboard, Mississippi State’s appears lost in the dark.

The Bulldogs lost 41-0 to No. 2 Alabama on Saturday. It was the first time head coach Mike Leach — who was hired to bring the high-scoring Air Raid offense to Starkville — has ever suffered a shutout loss.

Since putting up 44 points against LSU in the season opener, Mississippi State (1-4) has scored a total of 30 points in its last four games. Nine of those were scored by the defense, on an interception return touchdown and a safety. The offense has scored one touchdown in the last three games.

“We obviously know that we have more potential and could do more,” Mississippi State wide receiver Austin Williams said. “We all believe in ourselves and each other. Obviously, there is frustration, but we are positive and optimistic. We are going to try and move on to the next play and the next game. We know better things are going to come in the future. We just have to put our head down and work this week.”

Saturday’s result not only continued this season’s frustrating offensive trend for the Bulldogs (1-4), but a long history of futility against Alabama. The Crimson Tide has won the last 13 meetings between the teams, and Mississippi State has been held to seven points or less in 10 of those.

The last time Mississippi State scored a touchdown in Bryant-Denny Stadium, it was in the final minute of the Bulldogs’ tenure as the No. 1-ranked team in the country. Dak Prescott threw a 4-yard pass to Jameon Lewis with 15 seconds left in a 25-20 loss to the Tide in 2014. In three trips to Tuscaloosa since then, Mississippi State has scored a total of three points.

4
New Orleans Saints running back Alvin Kamara accounted for 163 total yards from scrimmage in a 26-23 overtime win over the Chicago Bears on Sunday, which helped him achieve a couple of milestones.

Kamara surpassed 100 total yards for the sixth game in a row to become the first Saints player to achieve that feat since Deuce McAlister did it in 2003. He also became the third running back in NFL history with at least 50 receptions in each of his first four seasons. Matt Forte and Hall of Famer LaDainian Tomlinson are the other two.

Kamara caught six passes for 96 yards against the Bears. He has 55 receptions for 556 yards and three touchdowns this season, to go along with 431 yards and four touchdowns rushing.

In addition to Kamara’s feats, the Saints extended their NFL-best streak of games without being shut out to 295. The last time the Saints were shut out was a 38-0 loss to the San Francisco 49ers in the 2001 season finale.

Elliott wins to advance to NASCAR’s championship round; Harvick eliminated