Officials: Halloween crowds noticeably smaller in the midst of pandemic 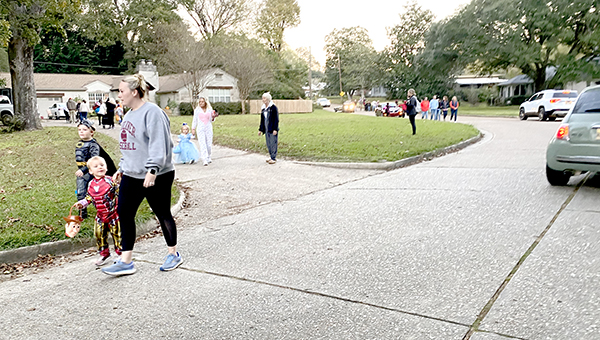 Trick-or-treaters move through the Glenwood Circle neighborhood Saturday evening. Even though crowds were smaller this year due to the COVID-19 pandemic, the neighborhood still welcomed thousands of children seeking out treats. (Tim Reeves/The Vicksburg Post)

At a time when masks are required and residents urged to spend more time outdoors, Halloween and trick-or-treating could not have come at a better time.

Saturday, thousands of children — with parents in tow — flocked to area neighborhoods to gather up sweets and display their best costumes.

The ongoing COVID-19 pandemic and concerns about the virus, however, did have an impact on the size of crowds that showed up.

“There were not as many kids out as there had been in years past, but we still had a fairly decent number of participants,” Vicksburg Police Chief Milton Moore. “It was just not as crowded.”

The Vicksburg Police Department had officers patrolling many of the neighborhoods in the city to control traffic and respond to any incidents. The same was true in the county, as deputies with the Warren County Sheriff’s Office covered areas that normally welcome large crowds.

“The people out on Halloween were very respectful of one another,” Warren County Sheriff Martin Pace said. “We did not have any major incidents and we also had much smaller crowds than in years past.”

Both Moore and Pace said the smaller crowds were expected as concerns about the COVID-19 virus remain.

“I think we all expected the small crowds. Parents are keenly aware of the dangers of COVID. And we saw fewer homes decorated and welcoming trick-or-treaters. Many residences chose not to participate in trick or treat activities at all,” Pace said. “But those who did come out had a good time. We were glad the children were able to get out and enjoy some fresh air on a beautiful night.”

“It went really smooth,” Moore said. “At around 8 p.m., we noticed that just about everyone had finished up.”

Pace said even though the crowds were noticeably smaller, the larger neighborhoods in the county still saw more turnout.