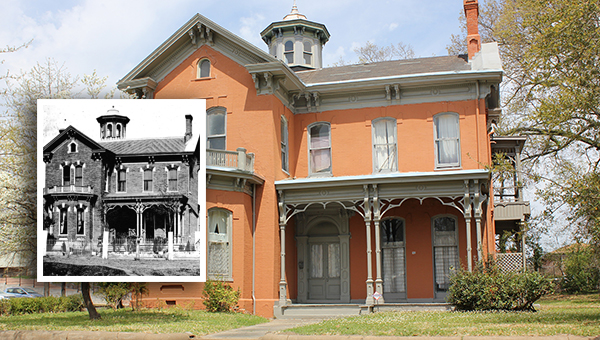 The Beck House, located at the intersection of Adams and South streets.

The Beck House, located on the northeast corner of South and Adams streets, is the best example of a high style Italianate residential building in Vicksburg and one of the best in the state.

It was built in 1875 by R.F. Beck, a prominent figure in the commercial and political history of Vicksburg.

Beck was born in Poughkeepsie, N.Y., in 1839 and moved to Vicksburg in 1865. He established a brickyard and quickly became a builder and contractor. He bought the Hill City Marble Works and by 1880 planted thousands of acres on three plantations in Mississippi, Arkansas and Louisiana.

In addition, he was a member of the Phoenix Fire Company. When a new steam fire engine was purchased in 1872 by the company, he was honored when his fellow firemen named the engine after him.

Beck had a long and varied public service career as well. He was elected an alderman in 1873 and, while serving in that position in July 1874, was named acting mayor.

The Daily Commercial Herald reported that “the other day our gallus Mayor, Benj. A. Lee, ‘folded his tent like the Arabs and silently stole away’ leaving Alderman R.F. Beck to act as mayor until another shall have been chosen at the municipal election.”

Beck was eventually elected mayor, serving three terms. He was also elected Warren County Sheriff and served three terms in that position as well. In addition, he was a member of the board of trustees of the public schools.

Beck married Mary Ellen Rigby in 1876 and the couple had two children, Thomas and Mary.

The Vicksburg Evening Post reported the funeral procession to the cemetery was probably the largest that has ever been seen in Vicksburg. “Mr. Beck’s death, while in the prime of life and at the zenith of his mental powers, is a loss to Vicksburg, and to the State.  This community is plunged into grief by his untimely death, and no matter what may have occurred during the heat of political campaigns, no man’s death will be more sincerely regretted than that of Mr. Beck, and no man’s place in the community will be harder to fill.”

Mary Ella Beck married Samuel Robert Hughes, a law graduate of the University of Virginia, on Nov. 9, 1894, in the house on South Street.

The house remained in the family until 1971 when it was sold to the Community Council, a charitable organization that used the building as a “halfway house.”

It was then purchased in 1978 by Beverly Bolton and Harry Yoste and restored. It was then sold again and has been occupied as a private residence.

Election officials said they have experienced only one problem so far on this election day — and it is a... read more