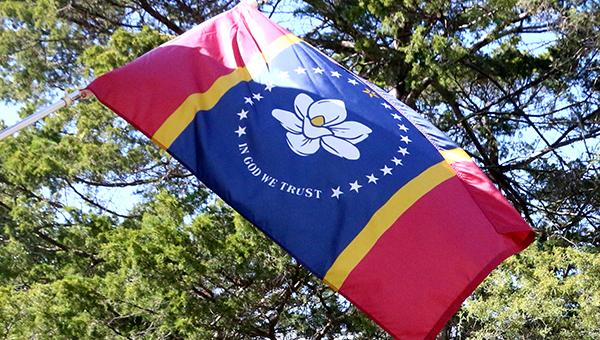 Local and state voters voted in favor of the "In God We Trust" flag as the state's new flag. (Terri Cowart Frazier/The Vicksburg Post)

When all the votes have been counted, Mississippi will have a new state flag.

With more than 65 percent of the vote counted, voters in the state appear to have selected the “In God We Trust” flag to fly high over the state, putting an end to a heated, decades-long debate. As of 11 p.m., nearly 78 percent of registered voters in the state support the new flag. In Warren County, the margin was very similar.

Of the ballots cast Tuesday, support for the new flag received 12,173 votes in the county, compared to 3,927 against.

After the result became clear late Tuesday, Mayor George Flaggs Jr. announced he would present the Board of Mayor and Aldermen a measure that would return the state flag — the new state flag — to the flag poles near city buildings.

In 1997, then-Mayor Robert Walker and city leaders decided to remove the former state flag, which included the Confederate Battle Flag, from the city’s facilities.

“Absolutely,” Flaggs said in response to whether he would suggest the new state flag fly over city buildings. “I will make the recommendation to the board at our next meeting.”

The vote puts a months-long process that began over the summer when the Legislature, led by Vicksburg native Lt. Gov. Delbert Hosemann, passed legislation that retired the former state flag and set up a commission that would seek designs and go through the process of selecting one design that would be placed on Tuesday’s ballot.

“Today, our citizens adopted by popular vote the flag of our future,” Hosemann said after the ultimate result became clear. “ It will portray us well for decades to come.”

As one of his appointments to the Commission to Redesign the Mississippi State Flag, Hosemann selected Vicksburg attorney Mack Varner. In recent days Varner canvassed the community, handing out yard signs and other materials to support the flag’s selection.

Varner said late last week that if the flag was approved by state voters, he would take a moment to celebrate and pop open a bottle of champagne.

“The overwhelming vote today in favor of our new state flag brings unity to all Mississippians,” Varner said. “It renews our faith in the goodness of our people and it sends a message to the nation that Mississippians reaffirm the faith that connects us all, ‘In God We Trust.’”

As for the vote, local voters offered why they chose to vote the way they did.

“I voted no for the flag,” first-time voter Ann Michael Jordan said. “I didn’t like the design.”

“I voted yes for the flag,” Georgeann Leavell said, offering an opposite view. “I think it is very pretty and much more respectable.”

Mississippi voters chose to keep the old flag in a 2001 statewide election, with supporters saying they saw it as a symbol of Southern heritage.

But since then, a growing number of cities and all the state’s public universities have abandoned it.

For some voters, voting in favor of the new flag was simply a vote to move on.

“I voted yes for the flag to try to put the past behind us,” Greg Ruff said.

“I feel it’s time for a change and it’s a good start for change in Mississippi,” Ashley Jones said.

John Manby, after leaving his polling place where he voted in favor of the new flag, said the reason he did so was, “because we all need to get along like brothers and sisters in these eyes of God.”

The flag, which has blue, gold and red banners, with a magnolia placed in the center, also includes 20 white stars and one gold star.

The focal point is a magnolia, which symbolizes hope, hospitality and rebirth. The circle of 20 white stars represents Mississippi as the 20th state of the Union and is anchored by a gold star at the top to honor indigenous Native American tribes of the land that would become Mississippi.