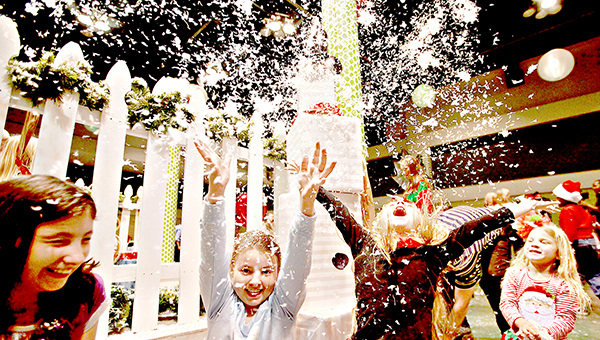 These youngsters jump for joy in the fake snow at 2016 Breakfast with Santa event at the Vicksburg Convention Center. (File photo/The Vicksburg Post)

More than a week after Mayor George Flaggs Jr. urged local tourism and convention leaders to think outside the box on boosting business at the Vicksburg Convention Center in a year impacted by the COVID-19 pandemic, a plan has been unveiled.

Friday, the Vicksburg Convention Center and VenuWorks, the company that manages the convention center, announced several opportunities and programs to attract more local and statewide meetings and conventions to the downtown Vicksburg facility.

“These opportunities will assist locals during a time when budgets are tight, assist state meetings when travel is limited and extend a hand to the city administration when there are budget limitations,” VCC and VenuWorks announced in a press release.

The main incentive is a price break on normal convention and meeting fees for organizations, individuals and businesses that reside or originate in Vicksburg and Warren County.

Flaggs’ comments came during the Oct. 28 annual meeting of the Vicksburg Convention Center’s advisory board, where center officials released the financial numbers from fiscal year 2020, which ended Sept. 30.

A year that began with what officials called a “record-breaking” beginning was brought to a complete halt when the virus-related restrictions began impacting the economy. In March, officials watched as nine contracted events were canceled. Twelve more were canceled in April and 28 more from May through September.

In the end, the fiscal year showed the convention center had just a $1.84 million impact on the local economy. Less than 20,000 people passed through the doors and the calendar showed just 88 days of events.

“With attendance numbers down 63 percent and event usage days down 50 percent from the previous year, we are setting our goals in a positive direction to continue and hold fast on offering the best possible service in the industry and continue going beyond expectations when clients are ready to get back to attending conventions, receptions, banquets, concerts, etc.,” Vicksburg Convention Center Executive Director Annette Kirklin said in presenting the annual report to the center’s board of directors.

Overall, the convention center reported an income of $292,501 and operating expenses of $809,937. The report also showed the city subsidy for the year came to $517,472. Events that were conducted at the Convention Center had direct spending into the local economy of $1.08 million, compared to $4.8 million in 2019.

In addition to the sliding discount scale for events scheduled before Feb. 28, the convention center staff is working with Visit Vicksburg on a Back-to-Business Meeting Incentive Program to attract meetings and conventions.

If a particular event meets a list of criteria, which includes being scheduled at some point during 2021, the event includes a block of rooms at a Vicksburg-based hotel or lodging property. If the event has more than 50 people, the event organizer or organization would receive a cash incentive from Visit Vicksburg.

Groups not eligible for the program include weddings, fraternal, social events, sporting events, and group tours.

In addition, Visit Vicksburg is providing virtual in-house meeting equipment to be used by the VCC to offer increased meeting amenities for planners. Standard opportunities including tour coordination, name badges and visitor’s bags for meeting planners will continue to be provided by Visit Vicksburg.

In addition to the incentives and plans to attract more events in 2021, the convention center and VenuWorks announced additional changes that would reduce the impact of fewer events and convention center revenue on the city of Vicksburg’s budget.

During the pandemic, VenuWorks has reduced staffing expenses, waived variable fees normally paid to the company and committed funding to cover normal day-to-day repairs at the convention center. As a result of these steps, VenuWorks was able to shave $150,000 from the originally projected annual subsidy requirement for FY2021.

To further improve the current situation, Steve Peters, president of VenuWorks, committed to reducing the monthly base fee the city pays to VenuWorks by 25 percent until further notice, beginning in November. The reduction will be re-examined with the Vicksburg Board of Mayor and Aldermen after 90 days.  VenuWorks was successful in securing PPP Loan funds for the Convention Center last spring in the amount of $84,458.