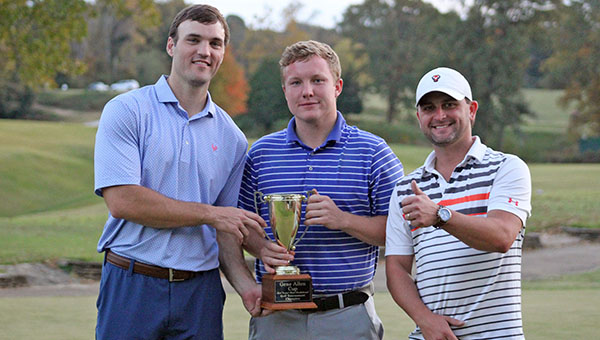 Chris Whittington, Chase Smith and Gage Parker got paid for their solid weekend of work.

The trio used a steady stream of birdies and pars on Sunday to build on their first-round lead, and cruised to a four-shot victory in the Fourth Annual Red Carpet Bowl Invitational golf tournament at Vicksburg Country Club.

Whittington, Smith and Parker shot a two-round total of 188 in the scramble/shamble format. They split a $1,200 cash prize for their victory. The second-place team of John Robert Ward, Charles Waring and David Smith finished with a total of 192 and split $750. Buddy Fisher, Birl Spicer and Jerry Hibbard were third, with a score of 196, and split $500.

“Usually you win money at the pro shop. We asked (tournament director Mike Jones) if this was at the pro shop or cash, and when he said cash we said, ‘Yeah, baby!’” Whittington said with a laugh. “It’s a lot better when you win $500 cash. We might go play some blackjack tonight.”

A total of $7,350 was awarded to the top teams in three flights. A total of 26 three-man teams participated in the tournament, and Whittington, Smith and Parker were the best all along.

They shot a 57 in Saturday’s scramble round, when teams play the best of their three shots, to take a one-stroke lead. Then in Sunday’s shamble round they kept it straight and steady to card a total of 131.

In a shamble, teams play the best of three tee shots and then their own ball from that point. The top two scores on each hole count for the team total.

“We put it in the fairway and had two or three chances at par or birdie every hole,” Smith said. “We just kept it in play. We didn’t have anybody make a bogey or double that we had to count. We had one bogey today.”

Whittington said that all three players were driving well, which made for easy approach shots on the tight and hilly VCC course. They started the final round with six birdies in a .

“All three of us are pretty long off the tee, so we were getting it down there and having a wedge into every hole. It made it a lot easier. Had we had a 7- or 8-iron into every hole it would have been really tough,” Whittington said. “We made birdie here, birdie there, all the way to hole seven or eight. After that, we just coasted.”

After building a six-shot lead by the turn, Smith said he and his teammates put it on cruise control on the back nine. Their playing partners Preston Walker, John Mitchell McDuffie and Garrett Dolcheck struggled to a 141 after shooting a 58 in the scramble round, which also helped them relax.

“The group we were playing struggled today, so we didn’t have to worry about them. The group in front of us, Charles and David and them, we didn’t know what they were doing but we knew we had a couple of strokes on them. It made it easier, for sure,” Smith said.

“We ham-and-egged it real well,” Parker said. “Everybody did their part every single hole.”

In the first flight, the team of Blake Wade, Tyler Ingram and Andy Amborn tied for first place with Parker Rutherford, Clay Crozier and Kyle Murphy for first place. Both teams shot 203 for the tournament and each won $975.

In the second flight, Chris Dodd, Rob Morrill and Billy Anderson shot 215 for the tournament and won a $1,200 first-place prize.