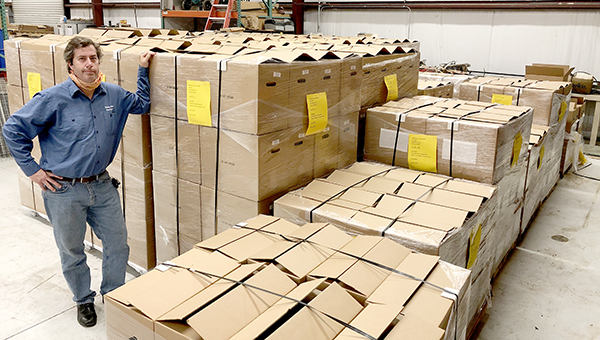 Vicksburg Warren School District Director of Technology Wade Davis is pictured with boxes of new Chromebooks that the district took possession of this week. (Submitted Photo)

At a time when students and teachers alike are becoming more dependent on technology because of distance learning, the Vicksburg Warren School District reinforced its standing as one of the most technology-focused school districts in the state.

This week, the district announced it had received and started distributing more than 7,000 Chromebooks paid for through the Equity for Distance Learning Act. The purchase will allow the district to replace its current fleet of Chromebooks and maintain the district’s position of having one computer available for every student.

“The technology department strives to support equitable instruction through accessible technology,” the Vicksburg Warren School District’s Director of Technology Wade Grant said. “We are grateful for the funding that allowed us to replace students’ devices early and give them the tools they need to be successful.”

The Equity for Distance Learning Act allowed the VWSD to expedite the transition to newer devices. The district’s earlier plan called for the replacement of existing devices over the next three years.

In addition to the Chromebooks, a maintenance and repair program was also purchased that will provide the district fast response when repairs are needed.

The Equity for Distance Learning Act was established by the Mississippi Legislature using funds provided to the state by the Coronavirus Aid, Relief, and Economic Security Act.