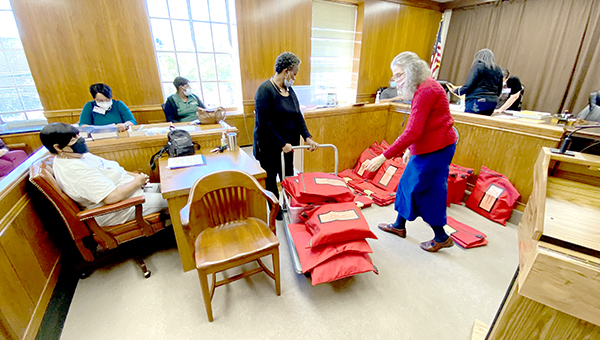 Nearly two weeks after the polls closed on the Nov. 3 general election, the final votes in Warren County have been counted and the election certified.

Members of Warren County’s resolutions board finished their process of verifying and counting thousands of absentee and provisional ballots Monday morning, putting a period on a historic election in Warren County.

After every vote was counted, the general election attracted a record turnout, with 71 percent of registered voters in Warren County casting a ballot. It was a turnout that put months of planning by local election officials to the test.

“We are all whooped. It has been crazy,” Warren County Circuit Clerk Jan Daigre said. “It was just a process. It was a historic election. We wished 71 percent of all voters participated in every election.”

Warren County Election Commission Chairwoman Sarah Dionne said the months of planning that went into preparing for an election during the COVID-19 pandemic resulted in few, if any, problems.

“As far as we are concerned, there were absolutely no major problems, almost no minor problems,” Dionne said. “The precincts all ran very well, the poll workers did an excellent job. the voters were patient. It just went very well. Lots of layers we had to manage — much more than usual — so it was a challenge, we were all very pleased with how well it went.”

If any problem was identified, it was the good problem of dealing with a historic number of those voting by absentee.

Daigre, whose office handled the absentee voting, said she thankfully switched vendors who provided the ballots to a company that gave her office the chance to print ballots as they were needed. Each ballot had a separate bar code, which allowed Daigre’s office to easily handle the record number of absentee voters.

It was that record number that caused Dionne and the resolutions board, the team who verified and counted each absentee ballot, such delays.

“It took longer but the resolutions board was very thoughtful and methodical and plowed through them as they met day after day,” Dionne said. “They’ve been meeting, starting on election day, about every other day since then. It’s been a lot more work on them than they anticipated and more than we did as well.”

The planning local election officials did in the months leading up to the presidential election, both Dionne and Daigre said, led to voters feeling comfortable and safe taking part in the election.

“Sarah (Dionne) is probably the most meticulous person I have ever met when it comes to planning. She drove that bus with the planning, along with all of the election commissioners, for the precincts,” Daigre said. “That put people at ease that allowed them to feel safe when voting. As far as my office and the courthouse, the steps that we took early on allowed people to feel safe voting absentee. I think people felt safer at first coming to the courthouse than going to the precincts and that is one reason I think why our numbers were so high.”

With this election now certified, both Dionne and Daigre can turn their attention to the next election — one that will hopefully be beyond the COVID-19 pandemic.

“Not sure if we will ever go back to like it was before the pandemic,” Daigre said. “We will always have to place the safety measures that we have taken with this election. It proved to be very successful. We did such a good job with that that I think it will remain in place from now on.  I don’t see that changing.”

Dionne said in addition to the safety measures put in place during this cycle, she and others hope voter enthusiasm remains.

“We were thrilled to have active voters. People did turn out in droves,” Dionne said. “I just wish in the future they would do that also. This election was important in many respects. So is the next one and the one after that.”

Daigre agreed, hoping voters continue to be part of the process.

As for the certified results, Warren County voters turned in a bit of a mixed bag. They supported both Republican and Democratic measures, while also giving strong mandates on ballot initiatives.

In the race for president, voters in the county supported President Trump and his re-election efforts by a very slim margin. Trump received just 77 more votes than former Vice President Joe Biden.

In the ballot initiatives, Warren County followed the rest of the state in strongly supporting the measure supporting the use of medical marijuana in the state and the one choosing Mississippi’s state flag. Voters in Warren County supported the new flag design, called the “In God We Trust” flag, by a nearly 11,000-vote margin.

Overall, 21,170 of the 29,782 registered voters in Warren County cast ballots, resulting in the 71 percent turnout.

The next countywide election is scheduled for June 2022. It will be the party primaries for the mid-term elections in November 2022.