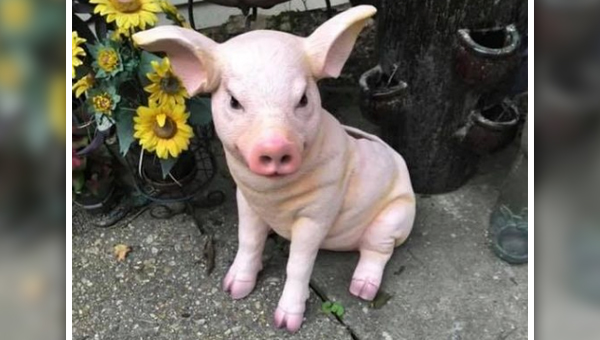 Louisa Whitehead shared this photo of her pink pig — a gift from her friend — that was recently stolen from in front of her Rifle Range Road home.

Louisa Whitehead was mad — “mad as a hornet” — she said, when she woke up and saw an empty space in her front yard.

The missing item was not a car or truck worth thousands of dollars. It was something much more valuable and precious — a pig.

A small, pink ceramic pig, to be precise.

Last week — sometime between Wednesday and Thursday — someone stole the pig from in front of Whitehead’s home on Rifle Range Road. She is still upset about what some might call a petty theft because, to her, it was much more.

Brenda Lynn, who has been a friend of Whitehead’s since the two were in elementary school, gave Whitehead the pig as a birthday gift in September. Whitehead said it meant a lot to her and that she had not yet gotten around to naming it. She simply called it “my pink pig.”

“I got up one morning and noticed that something was missing from my front yard,” she said. “I opened the front door and my pink pig was gone. It is special to me because (Lynn) gave it to me for my birthday and everybody loved it.”

“How would anyone do that?” Whitehead said of her friend’s reaction.

Whitehead said she did file a police report on it and also took to social media asking for help.

“If you see my pink pig anywhere please inbox me. Someone stole him out of my front yard,” she posted on Facebook.

The reaction, she said, to her social media posts and the posts of others who have shared it have been a combination of disbelief and anger.

“My friends were like, ‘Are you serious? who would steal a pig? Who would steal something out of your yard like that?'” Whitehead said.

Sadly, this is not the first time Whitehead and her family have dealt with things being stolen or cars being vandalized. She said that before she was able to leash her pitbull and Siberian Husky in her front yard, the family had cars broken into and windows smashed out of vehicles by those attempting to steal something from the vehicle.

She believes that since she has to now place the dogs behind the home — at times in crates — that it gave someone an easier opportunity to steal the pig.

“Could have been a random person or anyone who liked it,” Whitehead said, adding that the home was left alone for a few days while she was hospitalized. “Someone probably knew that I was at the hospital, or knew that I wasn’t here and decided to haul my pig off.”

Still, Whitehead said that she just wants one thing — her gift, her “pink pig” returned.

“I will be excited,” she said at the idea of having it returned. “If whoever stole it would just leave it in the yard and drive off I would not care. Just leave my pig.”