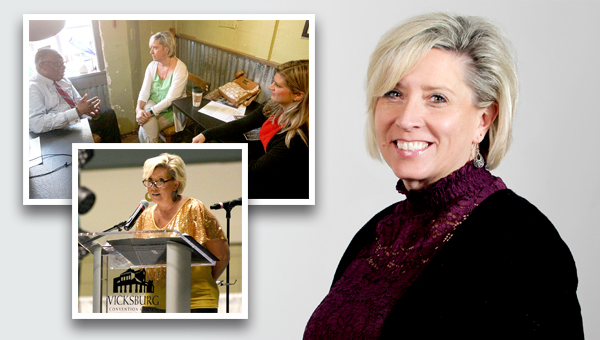 2020 Woman of the Year: Annette Kirklin

It wasn’t until she knew what had been accomplished, what had been pulled off, that Annette Kirklin stopped to take a breath and admittedly shed a tear.

As hundreds of people — all conforming to strict social distancing and COVID-19 protocols — enjoyed good food, a few drinks and great music during the 7th annual Ritz on the River, Kirklin realized something. She realized that it was not just Vicksburg who needed a good event after months of virus restrictions, shutdowns and quarantines, but it was something her team needed and something she needed individually.

While the event was not the size it had been in previous years, the work Kirklin and her team at the Vicksburg Convention Center did in pulling off one of Vicksburg’s biggest events was monumental and showed in the faces of the people who turned out. It also showed in the money raised for Good Shepherd Community Center.

It provided a return to purpose for the Vicksburg Convention Center’s team, which had all but seen its 2020 shut down as the tourism and convention industry came to a sudden halt in the spring.

But, just because the events were canceled, it did not stop Kirklin and her teammates. They continued to serve an important role in Vicksburg. In the early days of the pandemic shutdowns, the team thoroughly cleaned the building and began sewing masks for first responders and organizations in Vicksburg.

They helped prepare and serve meals for the elderly in the community, and through it all kept the focus on what they could do for Vicksburg rather than what was happening to them. Even after the staff had to be sent home for a few weeks, Kirklin continued to hold weekly meetings by Zoom to keep her staff updated on plans and to reconnect with those she considers her family.

“It’s the frame of mind that you have to have when you get up in the morning. Am I going to let this beat me down?” Kirklin said. “You constantly hear about the layings off and the furloughs this many months later. But, if you listen to it too much, it will weigh you down. You have to wake up in a frame of mind that you are going to tackle the day the best you can. You will keep your team motivated and you don’t have them look past that particular day.”

That effort not only kept her team — which returned to work after Memorial Day — motivated and together, it is what led to a successful Ritz on the River and led to Kirklin’s selection as the 2020 Woman of the Year, an award voted on by the readers of The Vicksburg Post as part of the newspaper’s annual Best of the Best Readers Choice Awards.

This marks the second time Kirklin has received the honor. She was the 2009 Woman of the Year when she served as executive director of the Southern Cultural Heritage Foundation.

“I still cannot believe it. There are so many more deserving women in this community. I could start naming them off right now,” she said. “I am just honored and humbled. But, they may have voted for me personally, but I do not think it is just for me. I think I am just the face people put with my team and the convention center. I feel by accepting this honor, I am taking something that does not belong to me.”

In such a challenging year for the convention center, where nearly 50 scheduled events were canceled due to the pandemic, Kirklin said it was her life experiences that gave her the attitude to deal with the year’s challenges and gave her a proper outlook moving forward.

As a reminder to herself and her team, Kirklin said it is also key to focus on the task at hand.

But even with her experience, 2020 has reminded Kirklin of what is most important.

“The lesson I have learned from this year is to be thankful, to be more thankful,” she said. “I know that sounds really cheesy, but it’s not. We are thankful as a team and everything that we have in this city and thankful for what is going on.

“I have a doormat at home that says ‘Be Thankful’ and it serves as a reminder that when you wake up in the morning, be thankful; if you have your health and your family is healthy, be thankful.”

A second riverboat cruise line has leased waterfront property from the city. The Board of Mayor and Aldermen Wednesday approved... read more