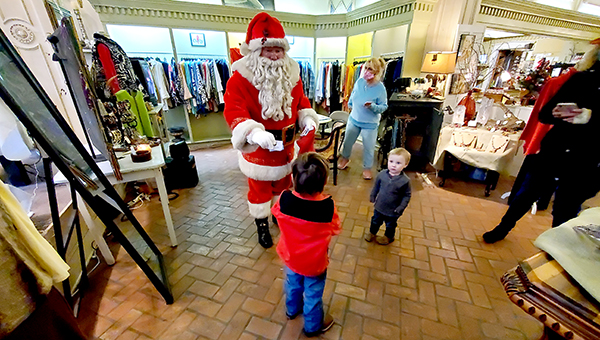 Weather does not deter shoppers from enjoying Holiday Open House

The rain and 50-degree temperatures Sunday were part of a weather system bringing a cold snap to the area, but the shoppers who parked on Washington Street to visit the downtown merchants didn’t seem to be affected.

Santa, decked out in his red suit and carrying a green umbrella to repel the drops, visited stores and talked to shoppers and children as he made his rounds.

He took time out at one store to take a selfie with two admirers and then spent some face time with two children through their mother’s cell phone.

“I was driving by when I saw him and asked him to encourage my children to be good babies,” said Jametra Johnson, whose children were the recipients of the special call.

While Santa was meeting with people, merchants were greeting customers, offering them refreshments and helping them with purchases.

Shoppers with purchases of $25 or more from local merchants received a free poinsettia from Main Street.

Two of those shoppers were Mallory and Salli Hobson, who earlier took a selfie with Santa.

“We came to shop and check out the sales and see Santa,” Salli said.

“We decided to make it a girls’ shopping day and support our local businesses,” said Lori Jones, who with friend Melanie Dornbusch were picking up their poinsettias. Several merchants said the weather hadn’t scared customers off — it only reduced the traffic.

“Business has been good, real good,” Peterson’s employee Mary Benson said. “We’re not as busy as in the past but we haven’t sat down.”

Peterson’s owner Bobbie Marascalco said she was “pleasantly surprised” by the turnout.  “I was worried the cold, wet weather would keep people away,” she said.

“We’ve had a good bit of people come down in spite of the weather,” Kim Hopkins said. She expected more people to come downtown once the weather improved.

“Everybody is ready to get out and get into the Christmas spirit,” she said. “The Downtown Open House has been a tradition for many years and people look forward to it every year to get out and support our local merchants.”