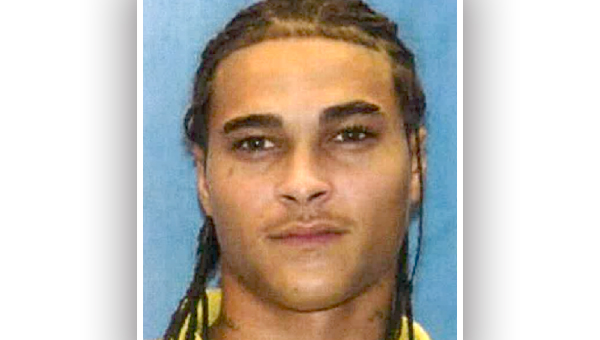 A $50,000 bond has been set for an Illinois man who assaulted his girlfriend and led Vicksburg police on a chase on U.S. 61 Saturday evening that ended with a fiery wreck in Claiborne County.

Judge Angela Carpenter set the bond for Bonjara O’Quin of Chicago, Ill., at an initial appearance in Vicksburg Municipal Court Monday. He is charged with domestic violence, felony eluding, no insurance, and having an expired driver’s license. The felony eluding is the only felony charge against O’Quin.

O’Quin’s arrest capped off a violent Thanksgiving weekend in Vicksburg that began with a shooting on Harrison Street Thanksgiving night where one man was killed and two others wounded, and a Friday afternoon incident where a woman fired two shots at a man after an argument over an apartment complex parking space.

The events leading to O’Quin’s arrest began about 5:13 p.m. Saturday when Vicksburg police officers answered a call about a domestic violence incident at the Circle K Convenience Store, 4749 U.S. 61 South, and confronted O’Quin, who fled south on U.S. 61 in a rented 2021 Nissan Rogue.

Officers attempted to stop the vehicle and the chase entered Claiborne County where the Nissan wrecked and burst into flames as O’Quin attempted to turn off of the highway near Y Camp Road.

O’Quin suffered minor injuries in the wreck. He was treated and released from Merit Health River Region and taken into custody by Vicksburg police. He remained in the Warren County Jail Tuesday.

The woman, who was also from Chicago, was left at the Circle K. She was evaluated by Vicksburg Fire Department paramedics at the scene but did not go to the hospital, according to police.

Vicksburg recorded its 11th homicide of the year when Joshua R. Coffee, 28, was killed and two men with him were wounded after someone opened fire on the car in which they were riding in the 1200 block of Harrison Street. The car left the street and struck a house.

Officers responding about 7:42 p.m. to a call of shots fired in the 1200 block of Harrison Street arrived to find Coffee and the other men in the car. Coffee’s death

All three men were taken to Merit Health River Region, where Coffee was pronounced dead in the hospital emergency room. One of the men was transferred to University of Mississippi Medical Center in Jackson and the other was treated and released, according to police.

Officers collected several firearms as evidence at the scene. The shooting remains under investigation and no arrests have been made.

Police Saturday arrested a Vicksburg woman wanted in connection with a Friday afternoon shooting incident at an apartment complex on Grove Street after Akeyah Daniels, 26, turned herself in to police at the Vicksburg Police Station.

She is charged with one count of drive-by shooting in the Friday afternoon incident in which she is accused of shooting at a man standing in the apartment parking lot. No one was injured.

Daniels was being held in the Warren County Jail Tuesday in lieu of a $50,000 bond.

According to police reports, witnesses said Daniels, a resident at the complex, and the man, who is also a resident, had an ongoing dispute about a parking space that erupted into an argument over the space Friday afternoon.

Daniels got into her car and left, firing a shot at the man as she left the parking lot. She returned and fired another shot before leaving the area.

The man and two companions who were initially held by police for questioning in the case were later released and are not charged in the incident.

A Warren County man is fortunate to be alive after his home was completely destroyed by a fire Tuesday morning.... read more