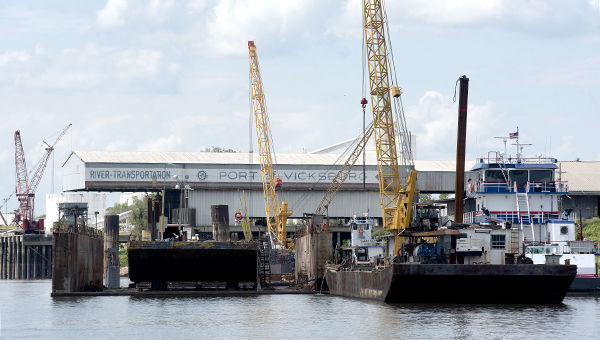 Monday evening, residents of Vicksburg received a Code Red message notifying them that a “chemical release” from an industry at the Port of Vicksburg was the source of a wide-spread odor in Vicksburg.

Tuesday, the city apologized, saying the message was not clear and was wrong. Officials with the Warren County Port Commission said a survey of industries on the harbor found no “chemical release.”

“No industry had a chemical release from the harbor,” Vicksburg Warren Economic Development Partnership President and CEO Pablo Diaz said. “At this time, we do not believe the odor came from the harbor.”

In the message sent just before 7 p.m. Monday, the city did not identify the source of the smell, nor did it identify the industry that supposedly performed the “chemical release.”

“Emergency services have been receiving calls concerning an odor being detected over a large part of the city,” the message read. “This is apparently due to a chemical release from an industry on the harbor. There is no danger, but some have reported irritation to the throat and eyes. If you are in an area with a strong smell you might want to stay inside.”

Diaz said if any company in the Port of Vicksburg needed to discharge any materials such as chemicals they would first have to follow a clearly defined set of protocols, which includes coordinating any discharge with the Mississippi Department of Environmental Quality and port management.

“We understand that no one did such,” Diaz said.

Mayor George Flaggs Jr., who apologized for any inconvenience caused by the poor messaging in the Code Red, said the message was sent in an effort to calm any concerns over a natural gas leak.

“The information was wrong,” Flaggs said. “The message should have said it was no gas leak and left it alone. It could have been written better.”

The source of the Code Red came from the city’s information technology department, which has the ability to issue such alerts. Flaggs said the purpose of the Code Red system is to provide alerts to the public-at-large with quick, important notifications.

The city reports there are currently an estimated 14,000 people registered to receive alerts from the Code Red system and that all of those registered could have received Monday’s alert.

While city officials and those with the Warren County Port Commission have ruled out any industries along the port as the source of the smell, the investigation by city departments is ongoing.

Cynthia Freeny had no idea what to expect. She, along with the other organizers of the Reindeer Run 5K, was... read more