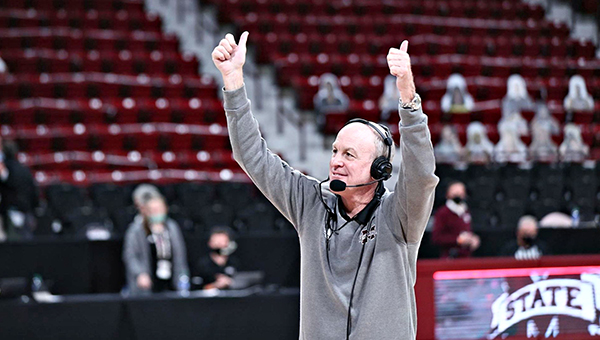 Howland’s other coaching stints have been at Northern Arizona, Pittsburgh and UCLA.

“It’s really special. I feel really blessed, and I am really blessed. I’ve coached so many great players, so many great kids,” Howland said. “I told our team after the game is the biggest thing that I feel blessed about is that I’ve found something that I love to do. I’ve been doing it my whole life. That’s what you have to find as a person is whatever it is that you love, and that you’re passionate about to make that your life. It’s such a blessing. I don’t know how many people get a chance to do that, but I’m definitely one of them. I’m very thankful.”

Alonzo Sule’s basket with 18:41 left brought the Bobcats into a 26-all tie. The Bulldogs (1-2) proceeded to outscore Texas State (2-1) by a 24-6 margin over the next eight minutes to put the game away.

Stewart hit two 3-pointers and scored eight consecutive points to give the Bulldogs a 36-28 lead. Jalen Johnson scored the next six points on a pair of 3-pointers, and the Bulldogs never let the margin get back to single digits.

Tolu Smith finished with 12 points and five rebounds for the Bulldogs. Nine players had at least three rebounds apiece. Javian Davis led the Bulldogs on the boards with eight, to go along with seven points.

Mississippi State has won 25 of its last 27 games under Howland when holding the opposition to under 60 points.

Mississippi State will next play Friday, at home against North Texas at 7 p.m.

Note: Because of COVID-19 issues, a number of games this season are being postponed or canceled each week and the... read more