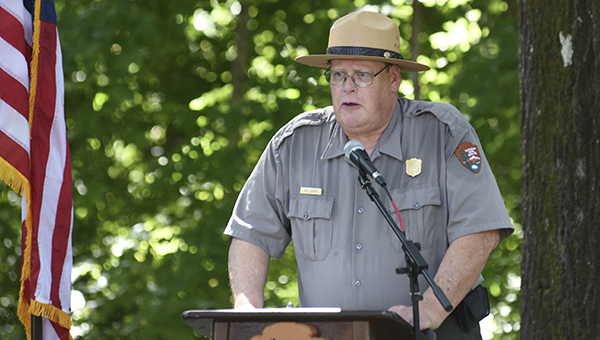 Justice, who was named superintendent in July 2015, officially retired Thursday after serving five years in the position.

“I’ve put in 42 years, working some spectacular places and done some great jobs, and among my greatest experiences has been working with the people of Vicksburg,” he said Thursday.

“The community is very passionate about the park and with partners like the Friends of the Vicksburg National Military Park and Campaign and the city, the county, it’s been a real pleasure to work in this park and especially to close out my career here.”

Justice said his first job with the National Park Service was in 1974 at C&O Canal in Maryland when he was a junior in college.

Since then, his career has taken him to parks throughout the country in roles as a resource manager, interpretation ranger and law enforcement officer. He has worked at two parks in Mississippi, Natchez National Historical Park and Vicksburg National Military Park.

“In a career full of memorable moments one of the best was walking through Champion Hill Battlefield shortly after it became part of Vicksburg National Military Park. That was a decades-long effort by a lot of people,” Justice said.

“I was thinking what an honor it was to bring those efforts to fruition,” he added. “The battlefield has changed so little since 1863, it’s like walking back in time. Adding that battlefield to the park changed the future of the park.”

Besides the parks in Mississippi, he has worked at Fort McHenry National Monument and Historic Shrine in Baltimore, Carlsbad Caverns National Park in New Mexico, C&O Canal National Historical Park in Maryland, and Abraham Lincoln Birthplace in Kentucky. Justice served as acting superintendent at Gettysburg National Military Park from May through September 2017.

He plans to stay in the Vicksburg area and spend more time with his wife, Barbara, who works at Cane River Creole National Historical Park in Natchitoches, La., spend time with friends, and explore the music and culture of Mississippi.

“Serving in the National Park Service has been a lifetime adventure,” Justice said. “Among the most rewarding things have been working with communities and partners to develop a shared vision for the future and helping make it come to life.”