Supervisors decide not to expand their current COVID-19 orders 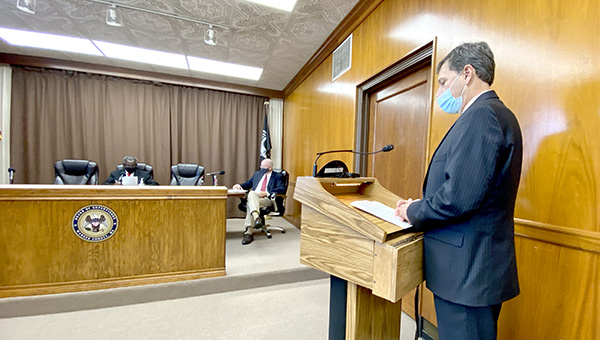 Days after the city of Vicksburg expanded its COVID-19 civil emergency orders, county leaders declined to do the same.

During its meeting Monday, the Warren County Board of Supervisors decided to stay with its existing orders but to closely monitor the spread of the virus.

Supervisors, who have worked alongside city leadership since the start of the pandemic, felt expanding its current orders were not necessary, as those orders cover much of what the city is now seeking to do.

Friday, Mayor George Flaggs Jr. announced the city’s order would require residents to wear masks both indoors and outdoors when social distancing is not possible. The order also now requires those hosting gatherings of 20 or more to check the temperatures of those attending and to keep a log of those who attended for contract tracing needs.

“I maintain that as these spikes are going up that I do not agree with the monitoring inside of personal homes,” District 3 Supervisor Shawn Jackson said, speaking in opposition of strengthening the county’s order. “I think what is really driving this is not the family unit, so I would like for the county to stay the course and not monitor what is going on in a person’s home.”

So far in December, Warren County has grown closer to being declared a virus hot spot by state health officials. Over the first eight days of the month, Warren County reported 188 new cases, the worst stretch of the months-long pandemic.

Those new cases, and the surge seen since Thanksgiving, is what pushed Flaggs to expand and enhance the city’s order. But, that action alone by the city also caused Jackson further frustration.

“I have asked several times that city hall and the board of supervisors get together and have collective meetings and conversations,” Jackson said, alluding to the lack of communication she feels there is between city and county leadership. “This is just too important an issue in our community for us not to all be on deck.”

Jackson also said she disagreed with Flaggs’ recent order and those, she said, it targeted.

“I am in support of a solid and data-driven approach, not necessarily one that is going to reign fear on individuals who have already bore the brunt of this pandemic,” Jackson said. “There are businesses that have hundreds of people and that is what is driving the spike more so than a private family gathering.”

Jackson also said she hopes the county would “not overreach into the personal lives of individuals in Warren County.”

As for the temperatures, if a person’s temperature is higher than 100.4 degrees, the person must not be allowed to enter the gathering.

Flaggs Monday said that it has long been his practice to discuss issues with the president of the Board of Supervisors. District 4 Supervisor Dr. Jeff Holland currently serves as the board’s president.

“If Dr. Holland the board wants to have a meeting about this, that is fine,” Flaggs said. “But I have had this policy for the past eight years of discussing things with the board president.”

“Somebody walking in a subdivision, for example, in theory, they are not within six feet of someone else,” Barfield said. “Just don’t know if it is enforceable at all.”

Barfield said, however, that the county needs to do a better job of enforcing the order that is in place. She said she and others on the board have heard of businesses in the county not requiring their employees to wear masks, nor are they requiring customers entering their business to wear masks.

In not changing their orders Monday, the county did urge residents to do what they could to curtail the spread of the virus.

“I hope they would have enough common sense that if they are ill, or feel ill, to not put themselves in those situations, such as larger gatherings,” District 1 Supervisor Ed Herring said.

That, along with the idea of expanding and enhancing the county’s order, will be the topic of an upcoming work session.