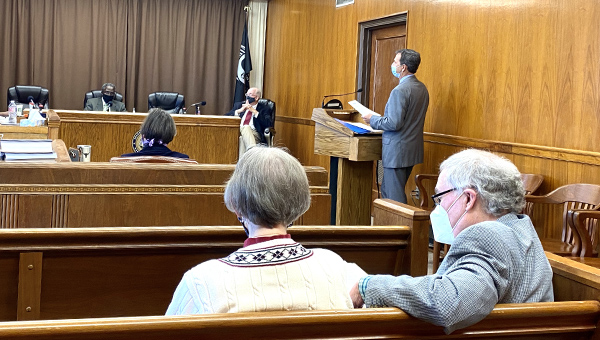 Former Warren County Prosecuting Attorney Ken Harper, foreground, sitting with his wife, Terri, listens to the debate on Dec. 21 by members of the Warren County Board of Supervisors on whether a resignation Harper submitted and then rescinded in September would be accepted. (Tim Reeves/The Vicksburg Post)

More than three months after he “hastily” submitted his resignation, Warren County Prosecuting Attorney Ken Harper is officially no longer in office.

After months of discussions and requests for information from the Mississippi Attorney General’s Office, Harper’s resignation — that he tried to rescind three days later — was officially received and accepted by the Warren County Board of Supervisors Monday.

The decision now officially creates a vacancy in the office that serves as the county’s prosecuting attorney in both justice court and youth court. It also sets up a special election in November 2021 where the vacancy will be permanently filled.

Harper submitted a letter of resignation to supervisors on Sept. 14, saying it was effective at 5 p.m. that day. Three days later, and before the supervisors met to act on the resignation, Harper rescinded the letter.

He continued to serve in that office until mid-October when Warren County Judge Marcie Southerland questioned Harper’s status due to his resignation.

In Harper’s case, he attempted to rescind his resignation after that date and time had passed.

During Monday’s meeting, District 2 Supervisor William Banks made a motion to go ahead and appoint Harper back to his office in the interim at his current salary, saying doing so was “respecting the will of the voters who elected Harper” in Nov. 2019. District 1 Supervisor Ed Herring seconded the motion, but when the motion came to a vote, Board President Dr. Jeff Holland, District 3 Supervisor Shawn Jackson and District 5 Supervisor Kelle Barfield voted against it.

Supervisors Monday moved to delay the appointment or selection of an interim county prosecuting attorney until January after they have time to meet with Southerland about the responsibilities of the individual appointed and establishing whether to appoint the interim as part-time or full-time.

Supervisors also said they would solicit or invite applications from those individuals interested in serving in the office for the interim, although they did not set a timeline for that selection process. They also said Harper was invited and encouraged to apply.

Asked whether he would apply for the interim post, Harper, who attended Monday’s meeting said “no comment.” Asked if he would be a candidate in November’s special election to permanently fill the position, Harper said “no comment.”