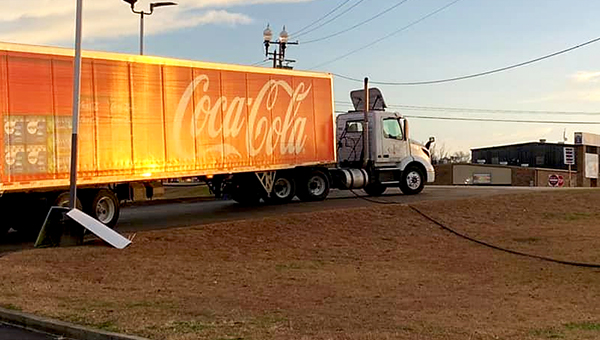 A delivery truck with Clark Beverage Group is seen with a set of power lines draped behind the cab early Wednesday. The accident occurred on Halls Ferry Road at the Chevron convenience store at around 7 a.m. (Tim Reeves/The Vicksburg Post)

Traffic along Halls Ferry Road, near the intersection with North Frontage Road, was slowed Wednesday morning as emergency officials and crews with Entergy responded to a single-vehicle accident.

Just after 6:30 a.m., a delivery truck with Clark Beverage Group appeared to knock down a set of power lines as it attempted to leave the Chevron convenience store’s parking lot.

When officers arrived, they found the truck stopped at one of the parking lot entrances with power lines and communications lines draped across the truck and on the ground. A nearby power pole was seen leaning.

Entergy power crews were dispatched to repair the pole and power lines. At 8 a.m., Entergy did not report any power outages in the area due to the accident.

The city’s traffic department also responded to block off one lane of traffic along the busy thoroughfare to allow room for the Entergy crews to work.

There were no injuries reported.

JACKSON (AP) — An inmate was pronounced dead Monday at a privately run prison in Mississippi after an officer found... read more