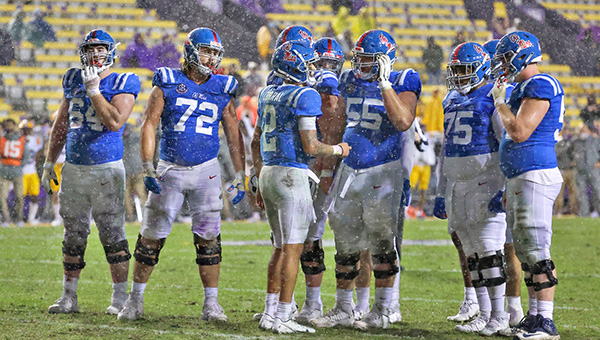 Ole Miss quarterback Matt Corral (2) talks to his offensive lineman during a game against LSU earlier this season. Corral and the Rebels will face No. 7 Indiana in the Outback Bowl on Saturday. (Joshua McCoy/Ole Miss Athletics)

There is a lot of novelty surrounding this year’s Outback Bowl.

It’s the first time its two participants, Ole Miss and Indiana, have ever played each other in football. It’s their first trip to this particular bowl game as well.

Despite all that, there are deep ties between the programs.

Five Indiana coaches, including head coach Tom Allen, once held jobs at Ole Miss. One of the Hoosiers’ best players, wide receiver Ty Fryfogle, is from Mississippi and his father played at Ole Miss.

Ole Miss head coach Lane Kiffin even has personal connections to some members of Indiana’s staff. It’s created a unique atmosphere for a game between teams with no on-field history between each other.

“I was fortunate enough to get to play football at Ole Miss and even more fortunate to have been able to go back and coach,” said Indiana wide receivers coach Grant Heard, who played and coached at Ole Miss. “My brother still lives there with his family, I met my wife there and have many friends still there, so there are a lot of great memories and I would not change it for the world. I am excited to get the chance to go out there and play another football game. It just so happens to be against Ole Miss.”

Heard is among a hoard of former Ole Miss staffers who followed Allen — the linebackers and special teams coach for the Rebels from 2012-14 — to Indiana over the past few years.

Defensive coordinator Kane Wommack, safeties coach Jason Jones, recruiting director Lee Wilbanks, and assistant Dwike Wilson all are on Indiana’s staff. Wommack recently accepted the job as the head coach at South Alabama and made Wilson, a Vicksburg native, one of his first hires.

Allen worked with Kiffin’s brother, Chris, at Arkansas State and Ole Miss and said he got to know the various members of the Kiffin family during those times.

“Chris and I were neighbors when we were there at Ole Miss together. So, know his family well and our daughter babysat for his kids and got to know (father Monte Kiffin), through Chris, then Lane,” Allen said.

Lane Kiffin is much more familiar with Jones, who worked on Kiffin’s staff at Florida Atlantic in 2019. Kiffin said the two keep in touch.

“Jason has done a great job. I texted him the other day,” Kiffin said. “I want to say we led the country in interceptions a year ago with him at FAU coaching DBs and now they’re doing it there. Obviously he does a great job.”

With so many Mississippi connections on the coaching staff, it’s not surprising that Indiana has expended some energy recruiting in the state. The Hoosiers have four players from Mississippi on the roster.

Fryfogle has been the best. The senior played at George County High School in south Mississippi, and was recruited by Heard to play at Indiana. He was a third-team Associated Press All-American this season and has 34 receptions for a team-high 687 yards and seven touchdowns.

“Knowing where he comes from, knowing his work ethic, there was something in him that I really liked. I was going to take him at Ole Miss before I left and because of our relationship he followed me up here to Indiana,” Heard said. “The hard work that he has put in has worked out for him, but I always thought he had the potential to be a very special player.”

Once the reunions are over, the Rebels and Hoosiers will still have a football game to play. They are two teams whose strengths should make for an interesting matchup.

Ole Miss ranks third in the country in total offense, while Indiana leads the nation in both interceptions and red zone defense.

“This will be challenging,” Kiffin said. “They’re very good. There’s a reason they’re 6-1 and have only lost to Ohio State by one score. They’re very challenging on defense schematically. They play really hard and create a lot of turnovers.”

The game is also the first recent high-profile bowl for two programs trying to turn the corner. Ole Miss is playing in the postseason for the first time since 2015.

Indiana is ranked No. 7 in the Associated Press Top 25 and making its second consecutive appearance in a traditional January bowl game. It lost 23-22 to Tennessee in the Gator Bowl last season and has not won a bowl game since 1991.

Although the bowl game is a step or two down in the national pecking order, it did nothing to dampen enthusiasm for playing in it.

“It’s amazing,” said Ole Miss center Ben Brown, a former St. Aloysius star who will be playing in his first bowl game. “It’s a little bit weird, not going to lie, practicing right now. Getting used to that. But there’s nowhere else I’d rather be than with my brothers and getting ready for a bowl game. Never been to one. Going to Tampa sounds like a lot of fun, playing against a really good football team. There’s nothing else I’d rather do Jan. 2.”