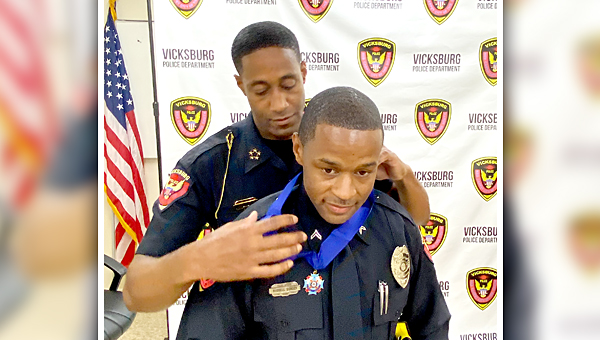 Vicksburg Police Chief Milton Moore places the Medal of Valor around the neck of Officer Russell Dorsey during a ceremony in October. (Tim Reeves/The Vicksburg Post)

In October, three officers from the Vicksburg Police Department were honored for their service that went well beyond the call of duty.

During a ceremony, the heroic actions taken by officers Matthew Barnes, Russell Dorsey and Africa Hunter were honored and history was made in the process.

Barnes received the Police Star for his actions on July 24, when he, along with pedestrians, helped stop a vehicle rolling through the intersection of Clay and Cherry streets because the driver had become unconscious.

During the incident, and as efforts were being made to revive the driver, the driver pressed the accelerator, causing the car to move through the intersection. Barnes used a hammer to break out the rear driver’s side window to gain access to the car. When he entered the car, he was able to shift the car into park and turned off the engine.

Officer Africa Hunter was honored with the Police Star for her actions taken on July 18. She helped revive a woman multiple times using CPR, saving the woman’s life.

On that day, Hunter was dispatched to Motel 6 for a welfare check that turned out to be far more and far worse.

The sister of a guest called 911 to report she had not heard from her sister and was concerned. After arriving at the hotel, Hunter tried to make contact with the guest, but no one answered the door. Hunter then asked the clerk to unlock the door.

When Hunter entered the room, she found a 50-year-old woman lying unconscious on the floor. Hunter checked the woman for a pulse and respiration but found none. After requesting medical assistance, Hunter began performing CPR. The woman responded and began breathing on her own, but then stopped. Hunter again performed CPR until emergency medical personnel arrived.

The woman again began breathing on her own and was transported to Merit Health River Region.

As for Dorsey, his actions on March 11, 2019, earned him the department’s highest honor — the Medal of Valor. He became just the fourth member of the department to receive it.

In response to a house fire on Howard Street, Dorsey found the home fully-involved and had been informed by a neighbor that there was someone in the home.

Dorsey stepped onto the font porch and was able to spot the resident, a 68-year-old man, inside trying to get out of the home but was unable to do so. Dorsey, using a hatchet laying nearby, chopped through the door and entered the home to get to the man, but was unable to do so after a ceiling fan fell and filled the home with thick smoke. Dorsey was forced to retreat back outside, where he took another breath and then re-entered the home.

Inside, he found the man on the ground behind a chair in the living room. Dorsey grabbed the man by his collar and pulled him to safety.

Dorsey joined Deputy Chief Bobby Stewart as the only two active members of the police department to have earned the Medal of Valor. Two others — Sgt. John Carter and Officer Greg Kurtz — also earned the award.

Carter, Kurtz and Stewart were each awarded the Medal of Valor for actions taken during a June 15, 2000 fire, where the three helped save the life of an infant. The fire was at a home on Royal Street.