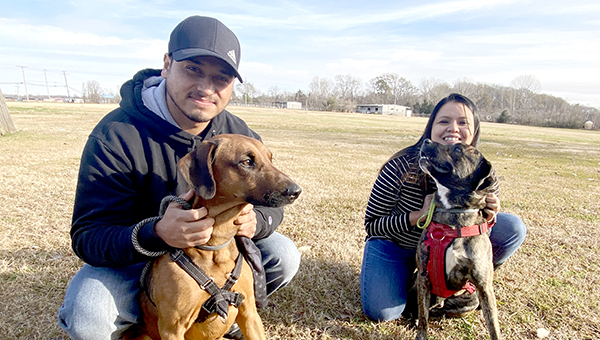 For two days, Sharon Hernandez could not sleep. For two days, her children and her husband, Cesar, sat at home and worried as Sharon made one phone call after the next, hoping.

But each time she made a call, it was further disappointment. No one had reported them missing, no one had turned them in.

There were a lot of what-ifs and waiting.

On Jan. 3, the Hernandez family was traveling home to Columbus, Ga., cutting through Mississippi along Interstate 20, when they needed to make a stop near Warren County.

When they stopped, a door on the car that was accidentally left open, sprang open and allowed the family’s dogs, Chase, 3, and Ryder, 2, the chance to get out. And as quickly as they got out, the dogs — beloved members of the family — were gone. They just disappeared.

“We were heading home from vacation and had been on the road for two days, so they were like ‘we’re booking it out of here,'” Sharon said recounting the moments when the dogs left.

For near an hour, the family walked along the area, drove along nearby roads and scoured nearly three miles of the interstate before making the tough decision to head home.

“We had already been on the road traveling for days, the kids were tired and were falling behind schedule,” Cesar said. “We had another six and a half hours left to go. It was a long drive home. It was painful. They were crying, but it is what it is. We had to get home.”

Once home, Sharon began calling one shelter after another and each time, it was the same answer, “they said that no one had turned any dogs in. No one had reported anything.”

But what Sharon, Cesar and their children did not know, was that Chase and Ryder — named for characters on the popular children’s show ‘Paw Patrol’ — had made it somewhere safe.

The two dogs allegedly traveled back west along Interstate 20 and were picked up by the Mississippi Highway Patrol between the Bovina and Flowers exits and delivered safely to the staff of the Vicksburg Warren Humane Society Sunday just before noon.

On Jan. 4, Humane Society Director Georgia Lynn reached out to The Vicksburg Post for help getting the word out about the two dogs brought in by Troopers. She shared as much information as she could and photos of the dogs.

A brief story on the dogs, along with their photos, was quickly put on the newspaper’s website and shared throughout the newspaper’s social media platforms. From there, it was shared by even more.

The next morning, Sharon reached the city of Forest’s Animal Shelter. She said the staff of the shelter was courteous and took down her information and asked that Sharon send photos of the dogs. But, in the midst of the conversation, one of the staff members remembered a friend had seen pictures of dogs looking very similar to the ones Sharon was looking for.

Lynn said she received a phone call from the Forest shelter asking about the dogs — which ended up being Chase and Ryder.

Soon, Sharon and Lynn connected by phone. Sharon said it was such a relief to know the dogs were safe.

“It was pure joy. I was so happy,” Sharon said. “The kids were so excited and it was so good to hear that someone had picked them up and taken them somewhere safe.”

Sharon and Cesar left home early that Wednesday and were reunited with Chase and Ryder at the Humane Society facility located on U.S. 61 South. It was a reunion of relief and appreciation.