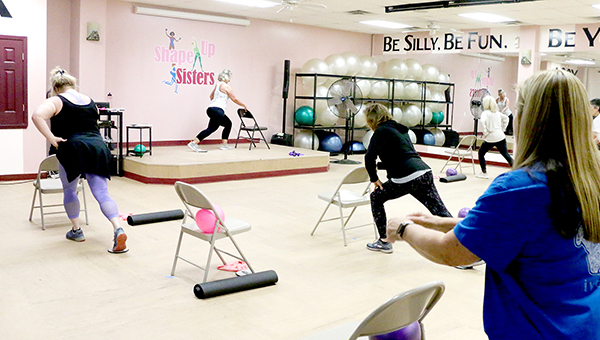 Shape Up Sisters’ class a ‘fusion of different kinds of exercises’

No leotards or tutus are required for the barre classes offered at Shape Up Sisters, but the results one can get from working out like a ballerina can make a difference.

This past October, Shape Up Sisters began offering barre classes, which Cheryl Van Norman, the instructor of the class, described as “a fusion of different kinds of exercises.”

“You have weight training and dance, which I love,” Van Norman said.

Barre classes became popular in 2005 and are ballet based. They focus on small movements that can benefit core muscle groups and flexibility, while also getting a little cardio going.

Van Norman has taught Zumba classes for the past five years at Shape Up Sisters, and compared barre classes to the “syntergy” classes — a combination of yoga and pilates — that were once offered at the gym.

Like the “syntergy” class, barre classes, she said, move at a faster pace.

“What I loved about those classes was the upbeat tempo that accompanied yoga-type moves,” she said.

Van Norman said she discovered barre on the Internet when the country was shut down due to the COVID-19 pandemic.

“I started getting online and found barre and I thought, ‘I love this.’”

So she became certified and now teaches barre classes each Thursday at 4:15 p.m. at Shape Up Sisters.

Shape Up Sisters owner Linda Fondren said she was aware of barre, but it is wasn’t until Van Norman approached her about barre classes that it was added to the gym’s other offerings.

“It is a low-impact class and women that have taken the class say they love it because you target those hard to reach areas,” Fondren said.

“Yes, everybody has really taken to it,” Van Norman said. “It is a lot of fun and easier to do than some people think.

Van Norman said during the barre classes, in which a chair is used, she will give instruction on what to do while also showing class members the moves.

Barre classes, Van Norman said, can benefit all age groups, but it is especially helpful for those who are aging.

“For older women, it targets the whole body and it builds strength in the legs and arms,” she said.

This could be advantageous if you were to fall, Van Norman said, because in building up these muscles, you would be able to get yourself back up.

“This is what you add in addition to classes you already take and it is good for those who are new to fitness,” she said. “Barre classes offer new ways for women looking for a new way to challenge their bodies.”

A move Friday by the Board of Mayor and Aldermen clears the way for the creation and installation of “Welcome... read more