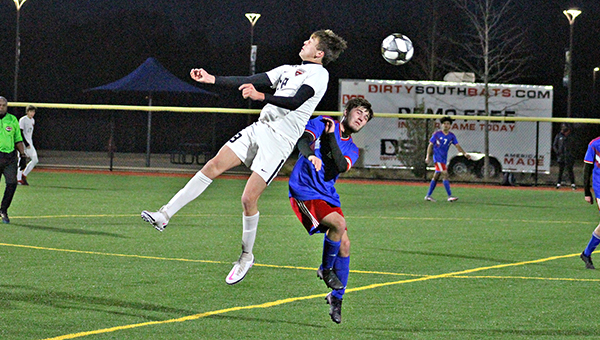 Through 160 minutes of soccer and a few penalty kicks, Warren Central and Clinton showed that the difference between them on any given day was whoever took advantage of one extra lucky break.

On Tuesday, that happened to be Clinton.

Clinton’s Tanner Jones scooted a shot across the face of the goal, past the keeper and into the net, in the 28th minute Tuesday. It was the game’s first goal, and stood up as the only one, as the Arrows beat Warren Central 1-0 at Sports Force Parks.

Each side had plenty of chances to score, but the defenses and keepers Ben Vroman of WC and Price Nixon of Clinton made several spectacular and many more mundane saves of the shots that slipped through to keep it a low-scoring game.

The only crack in the armor on either side came in the 28th minute. With the ball deep in Warren Central’s end, Clinton’s Hayden Wolfe sent a cross from the right side of the box to the left. Jones got it and took a wide angle with his shot to get it past the diving Vroman and just inside the right post.

Clinton missed a half-dozen opportunities to extend the lead over the last 52 minutes, about as many as Warren Central missed to tie it. The Vikings pressured right up until the end, when Brandon Gilliam’s breakaway chance went wide with a minute to go and a corner kick just before the final whistle amounted to nothing.

Head was pleased with his team’s defensive effort.

“We did better (than the first game),” Head said. “But I think we should have been able to score a goal. It happens. We’re just going to have to work on finishing.”

Despite the loss, the Vikings remained in control of the Region 4-6A championship race. Because of their earlier win over Clinton and this one-goal loss, the teams are tied on their head-to-head goal differential that is the first tiebreaker. Warren Central also has more region games remaining than Clinton, which means more opportunities to control its path.

“Right now we’re in better standing than (Clinton) because they lost to Murrah and we’ve still got to play Murrah one more time. We’re still in good standing to make the playoffs, and if we can beat Madison Central at least once then we have a good chance of winning the district,” Head said. “So we’ve got it set up where we have a good chance to either win the district or make the playoffs. We’ve got to do a little bit better than we did tonight.”

The next leg of the journey comes Friday, with a road game at Madison Central (4-2-1, 0-1). Madison Central has beaten Warren Central five consecutive times since 2012, but with the teams in Region 4-6A seemingly evenly-matched this season, Head believes it might be time to end the streak.

“All four teams in this district are evenly matched. If we’re going to beat Madison, this is our chance,” he said. “We’ve got two chances to beat them, and we’ve only got to beat them once.”

Tuesday’s girls’ game between Warren Central and Clinton was postponed because of COVID-19 issues among Warren Central’s players. No makeup date was announced.